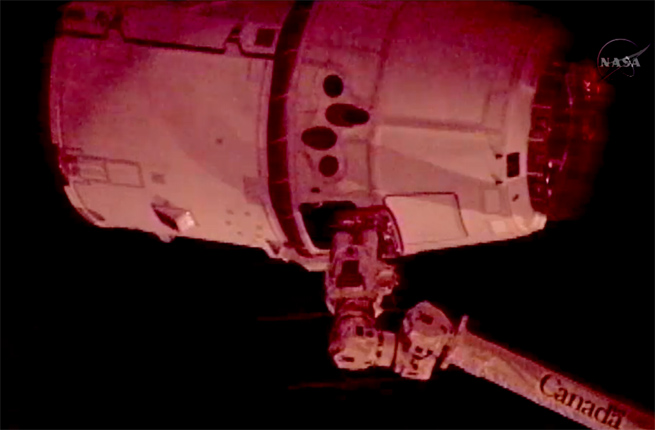 The closely watched SpaceX flight, the first private spacecraft to dock with the International Space Station, has been successfully captured by the robotic arm of the ISS.

The capture occurred at 9:56 a.m. ET Friday and was broadcast by NASA on UStream. The mission took about 3 days and 6 hours to complete. Next up will be the ISS installing the capsule so it can access on-board supplies.

The ISS has a robotic arm that reached out and grabbed the SpaceX Dragon capsule. (See photo above.) “We’ve got a Dragon by the tail,” NASA astronaut Don Pettit said after he used the arm to capture the capsule. (You might remember Pettit from this awesome Angry Birds Space video.)

Check out the gallery below to see more photos of the Dragon capsule capture, NASA’s reaction at mission control, and more.