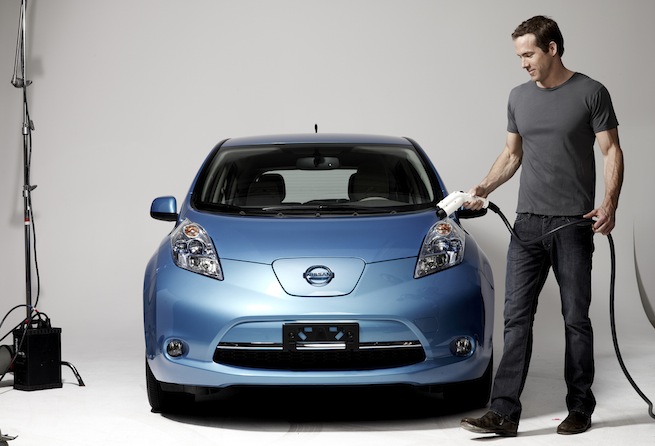 Car buyers are notoriously fond of focusing only on the purchase price of new vehicles, without much thinking about the total cost of ownership.

For electric cars that may cost twice or more what a similar-size gasoline vehicle does, that’s a problem.

Still, two separate pieces of evidence begin to make a compelling case for the huge running-cost advantages of plug-ins.

They’ll prove useful in conversations over the next few years, as friends, relatives, and neighbors question electric-car buyers about their new vehicles: why they did it, how much hassle it may be to plug in, and–of course–how much it cost. 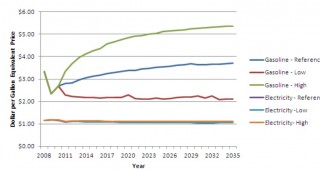 Above: Gasoline vs. electricity price in $/gallon equivalent, under 3 scenarios (by Max Baumhefner)

First is a post entitled Buck-a-Gallon Gas for Life?

Gasoline is high, higher, or very much higher; electricity stays cheap regardless of what happens to oil prices.

Even more compelling is a chart (at top) from the Edison Electric Institute, showing the volatility of gasoline prices and the minimal variation in electric costs over the same period.

In other words, plugging in your electric car to recharge it is the equivalent of paying a dollar a gallon for gasoline–forever.

Second is State of Charge, a study issued last month by the Union of Concerned Scientists on a variety of electric vehicle issues. (We’ll cover more of that study later on.)

While most early electric car buyers have other reasons than saving money, the running-cost advantage has to be better explained if plug-in cars are to reach a broader audience.

And while payback may still be hard to achieve, the lure of “buck-a-gallon gasoline forever” or “$1,200 a year in your pocket” may be enough to get fence-sitters more interested in plug-in cars.

Whereupon they may go for test drives, and discover one of the benefits that automakers (inexplicably) haven’t focused on: Electric cars are simply nicer to drive.

What do you think? How would you make the case that electric cars can save someone money?

This article originally appeared on Green Car Reports, one of VentureBeat’s editorial partners.