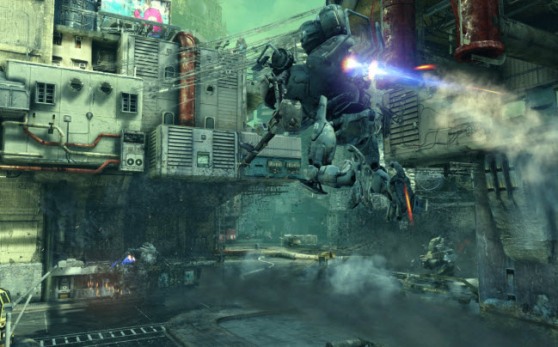 Hawken is one of the highly anticipated free-to-play downloadable games coming this fall. Graphics chip maker Nvidia showed a demo of the online mech-combat title today in order to demonstrate its cloud graphics technology.

Jen-Hsun Huang (pictured below), chief executive of Nvidia, and Gaikai (cloud gaming platform) chief executive David Perry showed how someone playing the game on an LG TV could square off against someone with an Asus Transformer Prime tablet. They showed the game at the GPU Tech conference last week, and Huang demonstrated it again at Nvidia’s analyst meeting (where I saw it). The demo is very impressive considering Hawken is not a disk-based game. The cloud-based technology will make it work easier and better for players who don’t have awesome gaming hardware.

“What is more fun than a mech first-person shooter?” Huang asked.

The game is sort of like Call of Duty meets Mech Warrior and has players dueling each other in a ruined city. They stomp around in giant robotic suits that can shoot a chain gun or missiles. In the video, you can see that the action is fast and furious. It has pretty good visual quality for a downloadable first-person shooter. With cloud technology, Hawken has the potential to reach a lot more users than it otherwise could alone.

The investors include Benchmark Capital and FirstMark Capital, the same investors who backed the highly successful Riot Games, maker of League of Legends (a downloadable web game that was so popular that China’s Tencent bought Riot for more than $400 million last year). Hawken is being developed by Adhesive Games, a small team in Alhambra, Calif. It will be published by its parent company, Meteor Entertainment, which is headed by chief executive Mark Long and has staff in Seattle. Meteor Entertainment recently raised $10 million in a bid to complete the funding of the downloadable online game.

The team previously worked on a game development team called Offset Software that was working on a fantasy action game known as Project Offset. Intel acquired the company because it needed a team of game makers to create software to run on its Larrabee multi-core graphics chip, which was intended to be the heart of a video game console. Intel had a deal in place to make the chip, but the project ran off schedule, and Intel ultimately canceled it. After that, founder Khang Le left and recruited former team members to begin work on Hawken, starting in 2010. They continued the work without funding as a labor of love.

Here’s a video that shows what the game play looks like, as demonstrated by Huang at Nvidia’s GPU Tech conference last week. The Hawken demo starts about three minutes into the video.