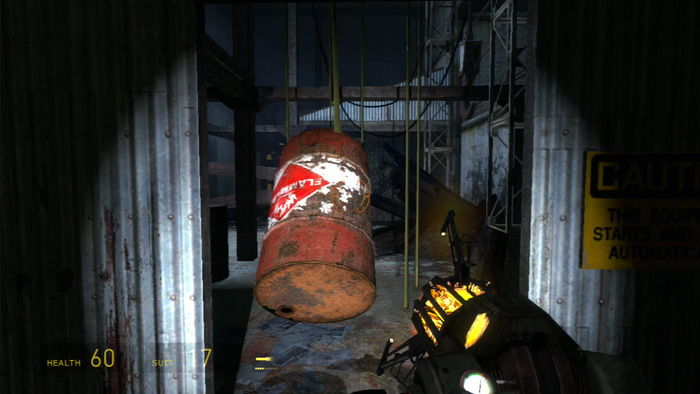 In the video game universe, health regenerates, swapping out a weapon clip before it’s empty does not typically decrease one’s total ammo supply, and many characters can jump while they’re jumping. With all of this craziness going on, it’s no wonder that even the most commonplace items behave differently in games than they do in our real world. What bizarre physics govern on these objects? I’ve discovered their secrets through the careful application of complex science and math (just don’t ask me to show my work).

Here are five objects that don’t act like their real-world counterparts and the truth behind their strange behaviors.

Our version: They don’t exist unless you load up a regular barrel with C4, and even if you did, you probably couldn’t get it to blow up if you shot it. What could be in those in-game barrels that makes them so unstable?

Game version: Volatile exploding barrels are ubiquitous in first-person shooters like Crysis. You can’t go into a secret compound, prison, or nursery school without tripping over the things. They are usually located near conveniently placed groups of enemies who stupidly use them for cover — not knowing that they are a bullet away from being blasted across the room. You can usually spot them by their eye-catching red or yellow paint.

The truth: While the contents of an exploding barrel are certainly hazardous, it doesn’t matter what’s in them. The company that makes all the barrels in the game universe wanted to be sure that everyone knew that they contained dangerous stuff, so it developed a special red paint would signify which barrels to look out for. Unfortunately, the paint achieves its brilliant hue from a high concentration of iron oxide, and the barrels themselves contain an aluminum alloy. Because bullets in video games do not follow physics as we know them (as we’ll see later), an impact from one provides enough heat and pressure to cause the iron oxide in the paint to react with the aluminum in the barrel. In other words, these barrels are made of thermite.

Our version: We don’t have one. Bullets will always injure the people that they hit regardless of the target’s charisma.

Game version: So-called “story bullets” are rounds against which even the most regenerative of health is ineffective. For example, the bullet that almost killed protagonist Nathan Drake in Uncharted 2 was a story bullet. Despite all the wounds he shrugs off throughout the rest of the story, this one proved nearly fatal. 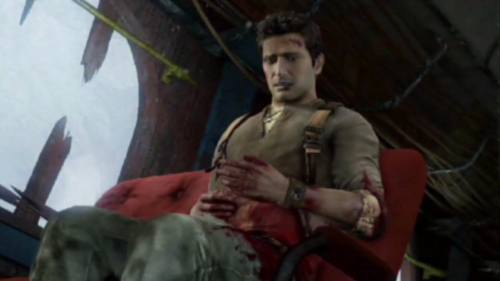 The Truth: Story bullets are composed of an ultra-rare material known as plotanium. Plotanium has many odd characteristics…not the least is its ability to affect the plot of a game in ways that regular bullets can’t — usually by mortally wounding a character who is otherwise nigh invincible. This metal is also strange for only being able to exist during cut-scenes. Science is not sure why this is true, but the leading theory is that in-engine graphics repel plotanium.

Our version: First aid kits typically contain bandages, gauze, and maybe some antiseptic spray if you spring for a fancy one. We use them to treat minor cuts, burns, and headaches. If a person is more seriously injured, the contents of a first aid kit can provide temporary treatment for the trip to a well-stocked hospital.

Game version: Forget that “first” bit; these things are all you’re going to need. First aid kits in video games offer 100 percent recovery from broken bones, gunshot wounds, sprains, shock, punctures, stabbings, muscle cramps, poison, concussions, serious burns, and sniffles. All a person needs to do is pick it up to repair every injury he has suffered.

The truth: Health packs in video games contain tubes of a special substance called temporal ointment. When applied to a wound, temporal ointment sends the affected area backwards through time to a point immediately before the damage occurred. Some game characters have used so much of the stuff throughout their lives that it is impossible to determine their exact age. For example, the Half-Life series’ protagonist Gordon Freeman’s arms, legs, and torso all exist at vastly different points in time, but you’d never get him to admit it.

Our version: Alcohol is a depressant usually consumed at social gatherings or whenever extremely sad people are thirsty. Common side effects of alcohol include impaired motor functions, introspection, and a firm belief in one’s ability to dance. It takes about an hour for the average person’s body to process 15 mL of ethanol by oxidizing it into acetic acid.

Game version: Alcohol affects game characters far less than it affects us. The most common result of drinking alcohol is a slight to moderate blurring of the vision, occasionally accompanied by a decreased ability to aim one’s gun. Symptoms typically last between five and 10 seconds, after which the drinker’s vision returns to normal.

The truth: The livers of video game characters are able to process alcohol roughly 400 times faster than we can. This may be related to the same genetic mutation that makes tissue regeneration so common in these people, or it could come from an as-of-yet undiscovered cause. Whatever the reason, game characters (especially those in first-person shooters) can drink all they want with no negative long-term effects. It is worth pointing out, however, that their incredible metabolic rate also means that they become fall-down drunk immediately after exposure.

Our version: Clothes keep us warm and offer valuable storage space for our keys, money, and high-tech electronic devices.

Game version: In most games, clothes keep the characters warm and offer valuable storage space for keys, money, firearms, grenades, ammunition, and any other equipment they might need along the way. Travis Grady, the protagonist of Silent Hill: Origins, could carry as many portable TVs, lamps, and IV stands as he could find with no effects on his mobility or comfort.

The truth: You might guess that clothes in video games simply contain more and bigger pockets than the ones that we have, and you would be right. What might surprise you, however, is that every pocket contains a wormhole-like portal that leads to a massive warehouse somewhere in New Jersey. When a character puts something into his or her pocket, it’s actually dropping through the pocket into that warehouse, and when they equip or use that item, they are actually reaching into New Jersey to retrieve it. The Pocket Portal has been a standard feature in video-game clothes since scientists discovered the technology in 1974.