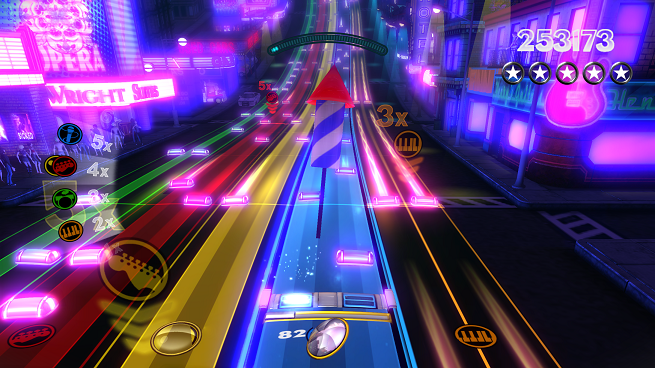 It looks like the band’s going to make it after all. Rhythm game developer Harmonix, like a budding breakout ensemble, flared into sudden popularity five years ago when Rock Band took the stage. Although the franchise offered awesome multiplayer jam moments, players bemoaned purchasing costly peripherals to fully enjoy each new iteration, quickly tempering the craze.

Music games became a billion-dollar business in the U.S. only to sink like a stone. Guitar games gave way to dance titles, such as Dance Central and Just Dance.

After a stint in developer nether, Harmonix returns with Rock Band Blitz for Xbox Live Arcade and the PlayStation Network, a streamlined musical romp feeling more arcade than authentic. Similarities to 2009’s Rock Band Uplugged are present within Blitz’s design, with the most notable feature entailing the disappearance of peripherals entirely. Here’s a rundown of what Blitz offers for the shred-heads out there.

The controller is your instrument. Within the streets of the fictional Rock City, Blitz presents up to five instrument lanes for the player: lead guitar, bass guitar, drums, vocals, and keyboard. Each lane splits into two note tracks corresponding to buttons on the controller. Like in Unplugged, players hit buttons in time to the chosen song. Difficulty levels hit the road, and players need only worry about a single note configuration for each song track.

Nailing notes earns points and an increasing combo multiplier for the selected instrument track. Each one “caps” at a certain combo limit, but players can freely hop between tracks at any point in the song and rack up additional combo caps. In fact, nabbing a combo of combos ensures both maximum returns on the scoreboard at a song’s finale and more chances to hit strings of white notes for that sweet moment of musical glory known as Overdrive.

Power-ups are frequent and frenetic. Not only does Overdrive skyrocket a player’s point multiplier when active, it also unleashes Blitz’s set of over 15 power-ups upon the track. The arcade influence kicks into full force with effects such as bottle rockets clearing distant notes, setting notes on fire, and bouncing a pinball across the screen. It’s a definite departure from the franchise’s simulation roots, but when the last guitar lick fades into silence, the same level of enjoyment from playing some of your favorite songs stays strong.

Most Rock Band and Rock Band 2 tracks work in Blitz. Harmonix plans 25 songs for Blitz’s launch, but the majority of the series’ extensive song catalog and the contents within its music store supports Blitz with an army of over 3,600 tracks. Blitz’s 25 songs are also playable in Rock Band 3 as well, and some of the confirmed songs include one-hit wonder “Jessie’s Girl” by Rick Springfield and Quiet Riot’s “Metal Health.”