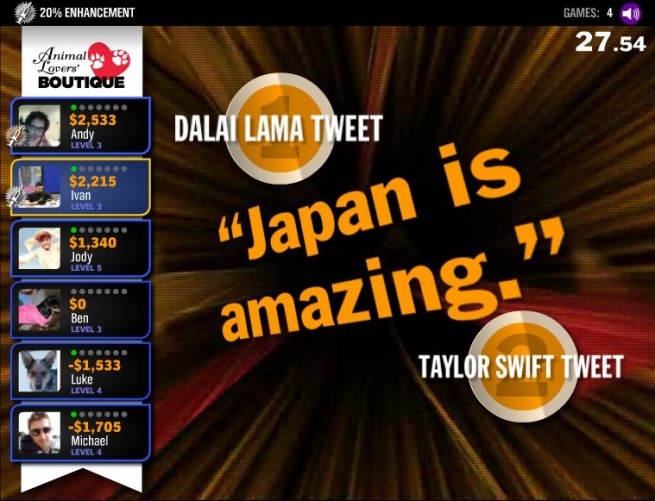 The folks working at Jellyvision Games — and one obnoxious dude named after a high-calorie treat — have spent nearly two decades making me feel stupid. And they’re still doing it to this day. It was time for me to get these guys back.

These are the developers of You Don’t Know Jack. Various iterations of this highly irreverent (and often condescending) trivia game have been around since the mid-’90s, and today, a new version is out to terrorize your social network. The good news about YDKJ for Facebook? It’s a bite-sized, approximately seven-minute-long distraction that doesn’t require your friends to be physically next to you playing on the same computer monitor or TV screen. The bad news? It’s Facebook. That means everyone can see how dumb you are without them needing to be physically next to you.

Last week, Jellyvision gave me an early preview of the new YDJK. I had a chance to interview the men in the room: general manager Michael Bilder, marketing director Marc Blumer, and Tom Gottlieb, the infamous voice of the game’s wise-ass host, Cookie Masterson. But I wasn’t interested in asking standard-fare questions like “Tell us about your game” and “Why are all of you such jerks?”

Like I said, it was time for me to get these guys back, so I set out to make them look clueless with our own trivia game, 5 Hit Points. Let’s see if they can survive our questions and keep as much of their video game health as possible.

Question 1: Your games tend to make other people chuckle, but there’s another “You Don’t Know Jack” out there that’s no laughing matter. Who was the headlining actor in this 2010 TV movie, and who was the real-life person that he played?

Tom Gottlieb: Should I buzz in?

Question 2: Your game became an actual TV game show about a decade ago, but it ended up getting replaced by another series whose star now has his own game show. Who is this guy?

GamesBeat: You buzzed in, so you have to answer.

Bilder: Oh jeez, there’s a timer! Ah…I was going to say Baywatch and David Hasselhoff, but that isn’t right.

GamesBeat: He’s now the host of…

Gottlieb: I do remember that now. 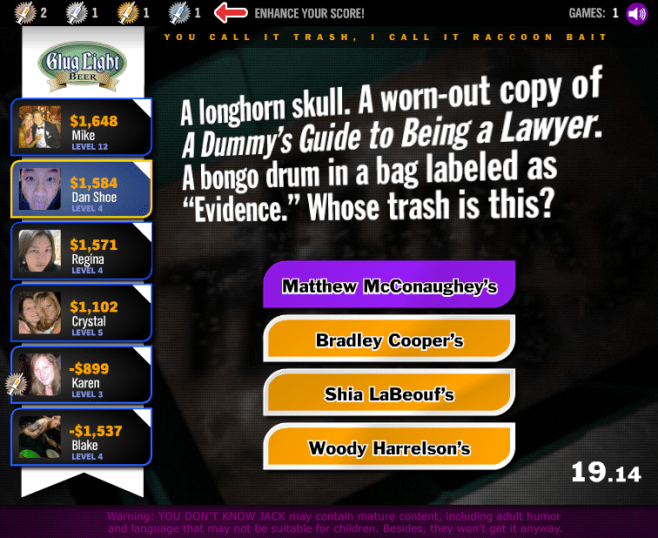 Question 3: Now, Wayne Brady had a guest role in the old FX show Dirt, starring Courtney Cox. What was the name of the particular episode of Dirt that he appeared in?

Question 4: Which two of these are not real You Don’t Know Jack products? Snack Pack, The Lost Gold, Mock 3, 5th Dementia, and Louder! Better! Funnier!

Gottlieb: The first one I’m almost positive is real.

GamesBeat: OK, here’s what we’re going to do. Marc, we’re going to force you to answer this one since we haven’t heard from you yet. Tom and Mike, you have to be quiet now.

Marc Blumer: [laughs] Uhh, I’m going to go with my initial instincts, right or wrong…with Snack Pack and the last one.

GamesBeat: Sorry. It’s Mock 3 — the real one is Mock 2. But you were right on the last one. It’s actually Louder! Faster! Funnier! You now have three hit points left.

Question 5: He sang country songs with such great titles as “Take My Drunk Ass Home,” “We Rode in Trucks,” “Drinkin’ Beer and Wastin’ Bullets,” and, of course, “You Don’t Know Jack.” Who is he?

Blumer: Yes he is. All of my social media monitoring? People Tweet his song lyrics constantly. [laughs]

GamesBeat: So you run into that when you’re looking for “You Don’t Know Jack”?

Bilder: So do we get an insult? I mean, Cookie would insult us for just getting an average score.

GamesBeat: I don’t have a team of comedy writers like you guys do….

Blumer: Well, a little crippled is how we walked in, so if we’re walking out that way, that’s not bad.