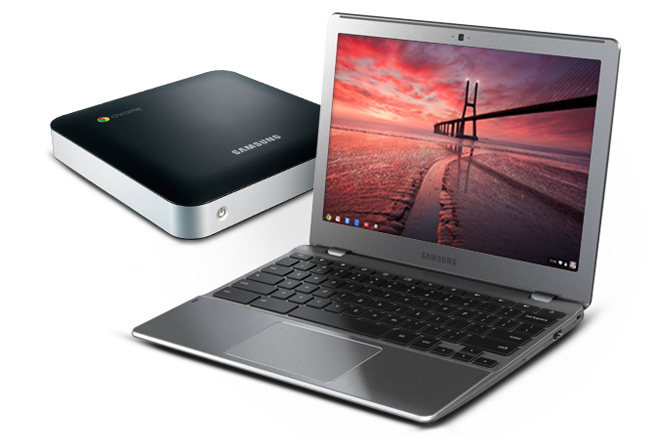 Google has introduced an updated version of its Chrome operating system and two new hardware options from Samsung that run the web-based OS — but it all still looks relatively underwhelming.

The search giant announced Chromebook laptops running the Chrome OS last May and finally started shipping units in June. Chrome OS is based on the notion of an always-internet-connected operating system. Not many consumers seem exited about a computer that will only “work” when it’s connected to the Web. Many apps work best installed locally on a machine rather than running it from the web. As such, Chromebook and Chrome OS adoption has not been widespread.

Now, Google is trying to change the tide with the launch of a more powerful Chromebook laptop as well as a tiny Chromebox computer that resembles Apple’s Mac mini that requires you to add a monitor, mouse, and keyboard on your own. Both pieces of hardware are made by Samsung, and both run a new version of the Chrome OS that we first got a look at in April. The new Chromebook laptop starts at $449 while the Chromebox costs $329.

As you can see in the photo below, the latest version of the Chrome OS looks much more like a Windows desktop versus what it previously looked like. It’s definitely a step in the right direction, and consumers will no doubt respond better because they are more familiar with how to operate it.

That said, there is still an inherent weakness in the Chrome OS that makes buying the hardware a dicey proposition for many users. As The Verge notes in a review, you can buy a much more versatile Windows 7 laptop for the same amount that you would spend on a new Chromebook. Om Malik seems to like the new Chromebook, but he still considers it a secondary machine instead of a primary one.

And as for the Chromebox, it seems to be a decently priced machine that could replace a desktop — as long as you don’t need access to dedicated local applications. But I don’t seriously believe that number is very large. For instance, right now I’m running Spotify for streaming music, a multi-IM client, and Photoshop, and all of those are outside of the browser. Strangely enough, the Chromebox also has no VGA or HDMI port, which limits the displays on which you can set it up.

You can watch a video describing the latest Chromebook below: