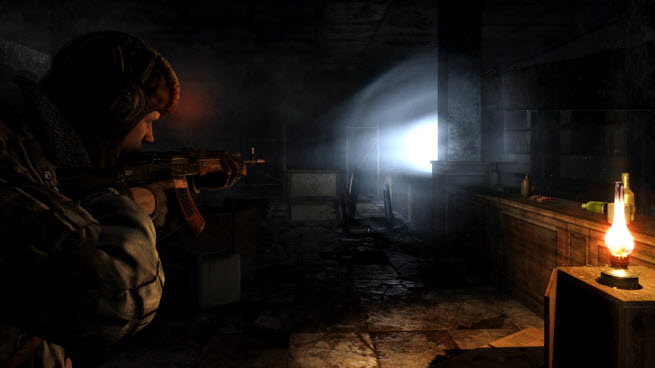 Metro Last Light, the upcoming sequel to shooter game Metro 2033, is a creepy story-driven amalgam of several  different game types. That might make it fresh enough to give it considerable mass market appeal when it debuts in 2013. At its core, the game is a first-person shooter set in the subways and ruins of post-apocalypse Moscow. But it also has adventure elements, a cinematic story, great graphics, and a light role-playing game angle. 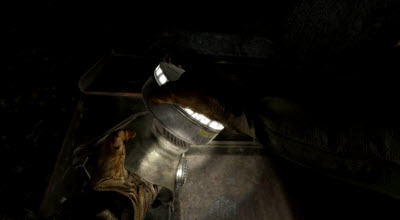 I got a look at a preview of Metro Last Light, and it looks beautiful, if that’s the right way to describe a title with a horrific environment and so many ways to die. If Ukrainian developer 4A Games follows through on this game’s promise, I believe the game could help turn around publisher THQ and breathe some new life into the first-person shooter market, which has been dominated by Call of Duty and Electronic Arts’ Battlefield and Medal of Honor games.

To many gamers, that shooter market has become stale. Metro Last Light is fresh because it shifts the point of view to the Russian perspective (rather than the typical American or Western view) after a nuclear holocaust. And it offers a deeper single-player story.

“Are you mourning the death of first-person shooter single-player campaigns?” asked Huw Beynon, head of communications for THQ in the first presentation of the game for journalists since it was unveiled a year ago. “This is our bid to combat shooter fatigue. We are crafting a single-player experience that players will remember for years to come. Metro Last Light is more than just a shooter.”

It is an action-adventure game where you have to scrounge to find supplies and level up your weapons and character. The environment itself is hostile, and players have be wary of radiation and stay out of the way of mutated predators that roam the ruins of Moscow.

THQ released the first cinematic video trailer showing the story behind Last Light last week, and it’s quite well done. That trailer tells the story of a nuclear war from the Eastern European view, showing the mad rush to the shelter of the subway in Moscow after nuclear missiles are fired. Twenty years later, humans emerge from the subways, only to find horrifying predators such as giant rats, huge bats, and gargantuan spiders.

“This is not a western vision of the apocalypse,” said Beynon.

THQ has gone deeper with the story-based play in this game than the first version, which was based on a novel by Russian author Dmitry Glukhovsky.

In the trailer, an old man listening to a short-wave radio hears about the onset of nuclear war. He warns people to start moving to the Metro, or the underground subway, in Moscow. No one believes him until the emergency alarms go off. A woman who was singing to her baby runs toward the Metro entrance. Moscow’s own nuclear missiles launch into the air and a panic ensues.

The trailer is set in 2013, and it features an all-Russian cast. Not a word of English is spoken unless you count the prophet of doom screaming, “Armageddon! Armageddon!” But you can understand exactly what is happening. The woman with the baby shouts at a Russian officer guarding the entrance to the subway. She gives him her baby. He takes it, and heads underground. The doors close, and the nuclear bombs go off.

This kind of memory comes back to the main character in the form of flashbacks, allowing the gamer to see a ruined site in its former glory. This kind of drama is a step up from the story of the original title, Metro 2033, which debuted in the spring of 2010. When Artyom, the main character, emerges from the Metro subway, nothing stands except the stone shells of buildings. He is accompanied by a guide who helps him navigate the terrain.

Instead of shooting everything that moves, Artyom and his companion hide from herds of wild animals. They look for bullets and have to save ammunition by pummeling giant spiders with their gun butts. They wear gas masks and have to search for fresh filters. 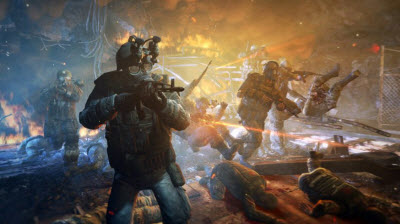 Artyom is attacked by a flying bat-like creature and has to aim carefully with each shot in order to keep from wasting ammo. When the fighting gets hairy, Artyom can toss a Molotov cocktail at attackers. Rain falls and the characters note how they haven’t seen such a thing since before the war. Artyom and his guide find a downed airliner full of supplies. When they reach the cockpit, Artyom has a full-blown cinematic flashback to the plane’s final minute as it crashed into a nuclear fireball. 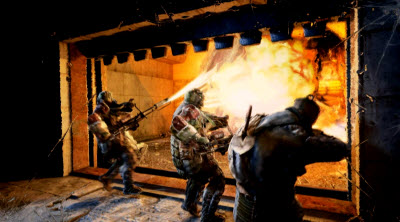 The realism is gritty. Artyom has to wipe spider guts from his gas mask so that he can see better. Giant rats charge the two shooters, who have to flee and fire backward as they can. They reach the door to the subway with seconds to spare. Three friendly soldiers pop out to assist, blasting back at the giant rats with flamethrowers. Artyom and his friend escape into the protection of the underground Metro. Such is daily life in Moscow of the future.

The game is coming out in 2013 and is approaching its alpha test version. THQ has its financial problems right now. But if it can last long enough to have this game see the light of day, it just might be around to make a third Metro game.

Check out our video intervew with Mark Madsen, global brand manager for the Metro franchise. And below that is the cinematic short film for the game. 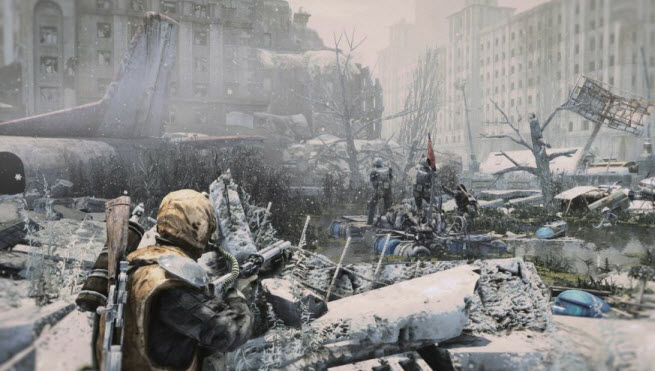