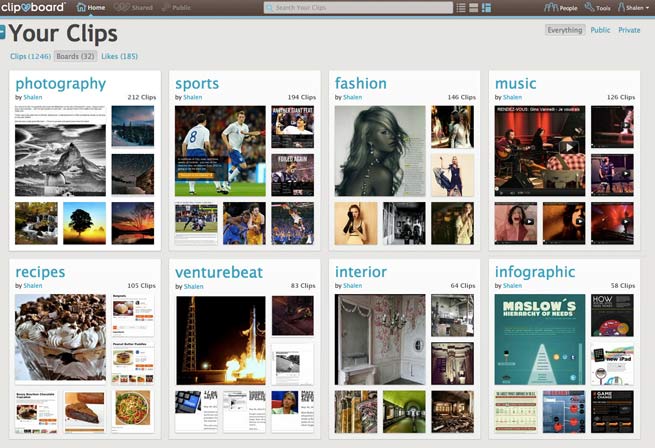 Web-clipping and bookmarking tool Clipboard is dressing up in its best new features and making a grand public debut today. The site, which has been invite-only since it launched in October, is finally open to anyone who wants to sign up. It is also introducing a new Boards feature, which lumps items into collections by tags, as well as a few other new tweaks.

Clipboard lets you bookmark, collect, organize, and share web-clippings. It’s not limited to images — it clips text, audio, animations, and fully formatted sections of webpages with links intact. You can keep your clippings private and use it as a self-organization tool, Evernote and Delicious style, or share them with a select group or the world. You can also follow other users and checkout their public clips. 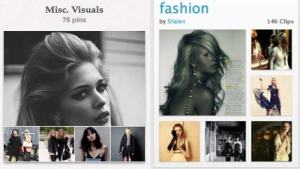 Above: A Pinterest Board (left) and a Clipboard Board (right).

Though Clipboard founder Gary Flake bristles at the comparison, his baby obviously has a lot in common with visual bookmarking juggernaut Pinterest. There’s the basic clipping concept, the image-heavy irregular-grid layout, and the buttons to like or re-share a bookmark. Even the star new feature, Boards, begs a comparison to Pinterest’s Boards, what with the exact same name and almost identical design (pictured right).

But comparisons are beside the point. Clipboard takes what Pinterest does well and expands on it, improves it, and I think infuses it with a new level of usefulness that is missing from the shallow, all-social site.

Computer scientist Flake has thought extensively about what he calls the “sharing landscape,” coming at it from the uniquely cerebral background you’d expect from a former technical fellow at Microsoft. He’s carefully considered the other major players and the different motivations of their user bases.

Clipboard accomplishes this by having more useful content than Pinterest. Where a Pin might show a pretty image of a cake recipe, you still have to click through to get that list of ingredients. Clipboard displays the full recipe along with any relevant in-text links. It also shifts the focus from exhibitionism to useful tool by being private-by-default with social options instead of the other way around.

“We respect users’ privacy more than anything else,” said Flake. “You own the data and you are lending it to us. It’s your stuff, not ours.” 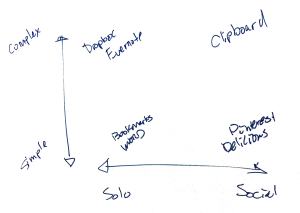 Flake was kind enough to sketch up this awesome chart (right) showing where Clipboard falls in the ecosystem of sharing and clipping tools (we love it when founders draw diagrams for us). It is ambitious, able to collect complex data instead of just images, and works as a solo or a social sharing tool.

Currently, Clipboard is just focused on wooing new users and getting established, but Flake has something rare in Silicon Valley: a plan to monetize his product that isn’t based on selling the company. One option is to take “the intent and the context and how that’s presented and turn that into a similar alignment of interest.” That means Clipboard could one day use your data to serve you with offers, products, or ads that are right up your alley. Other possibilities Flake is considering are an enterprise product and revenue sharing.

The young company has already rolled up a couple of competitors, Amplify and Clipmarks, but faces stiff competition from the revived Delicious and Snip.it. Clipboard has received funding from Andreessen Horowitz, Betaworks, Index Ventures, CrunchFund, SV Angel, First Round Capital, and others.