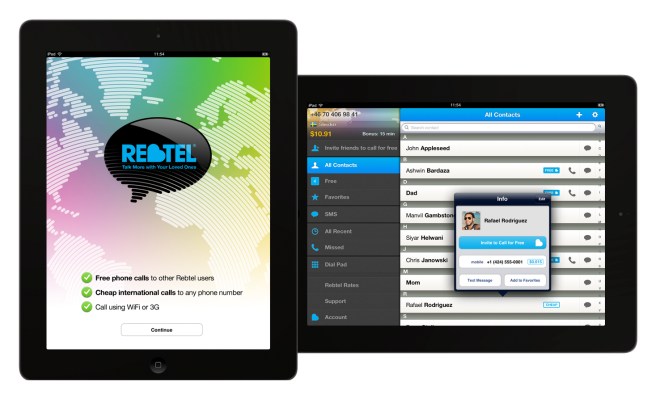 Building on its voice-over-IP calling empire, Rebtel announced today that its VoIP app is now available for the iPad.

Rebtel has become a popular solution for consumers who want to make cheap phone calls — the company revealed today that it now has more than 17 million users, up from 15 million in February. Rebtel’s apps allow for free calling to other Rebtel users, as well as cheap calls to landlines and mobile phones.

The company is now seeing more than 1 billion minutes worth of calls every year, and it’s growing by 650,000 users a month, CEO Andreas Bernstrom told VentureBeat in an interview. He predicts an $85 million revenue run rate for 2012, based on the company’s current success this year.

“We are squarely in the middle of the post-PC era, marked by an increasing amount of consumers who have leapfrogged the classic desktop PC in favor of multi-purpose mobile devices that allow for greater creativity and social interaction,” Bernstrom said in a statement today. “We are excited to expand our development pipeline to respond to this growing global demand for tablets and iPads.”

Rebtel’s apps have the unique ability to let you hop between data and voice connections to avoid network congestion — something that other VoIP services like Skype sorely lack. Data networks are typically unreliable for long phone calls, so Rebtel developed a “KeepTalking” feature to let you continue a call over your voice network instead of dealing with spotty data reception.

The Swedish company has spent considerable funds and effort setting up the infrastructure for its service. Bernstrom told us previously that it brought in $20 million worth of financing from Benchmark Capital and Index Ventures in 2006 to build a system that could connect with operators around the world and terminate voice calls in any country. During 2011, the company put together the data side of its infrastructure, including codecs and stacks to carry voice over data connections.