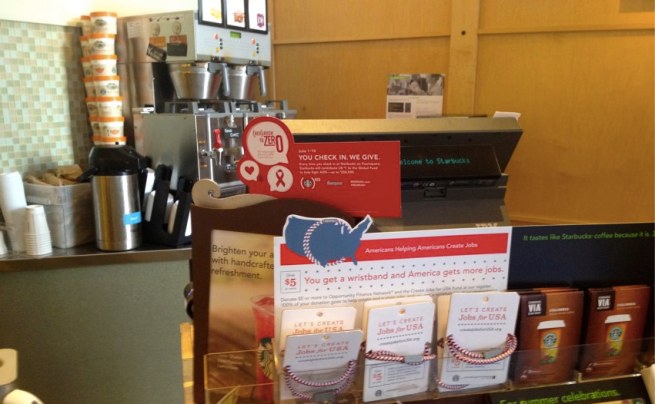 Fighting AIDS through Foursquare check-ins and lattes, non-profit (RED), Starbucks, and the location-based startup have partnered up for a 10-day fundraising and AIDS awareness campaign.

From June 1 to 10, Starbucks will donate $1 to the Global Fund, the recipient of (RED) money, for every Foursquare check-in at any of its locations in the U.S. and Canada. The partnership and check-in campaign, which will raise up to $250,000, aims to spread the word via social media channels around (RED)’s Rush to Zero campaign, an effort that seeks to eliminate the mother-to-child transmission of HIV by 2015.

(RED) is the non-profit founded by Bono and Bobby Shriver in 2006 to raise money for the Global Fund and fight AIDS in Africa. The organization has raised more than $190 million to date, and Starbucks has long been a RED partner having already contributed $10 million to the Global Fund.

“We are excited that through (RED)’s check-in activation with Foursquare, our customers have an easy way to help make a difference towards an AIDS free generation by 2015, a hugely important milestone in the fight against AIDS,” Starbucks public affairs executive vice president Vivek Varma said in a statement.

Foursquare says the fundraising effort is the startup’s largest non-profit check-in campaign to date. The startup will also be commemorating the proxy donations by doling out virtual (RED) Rush to Zero badges to members who participate.