After over 4 years of free updates, DLC and tons of hats! Its time to review Team Fortress 2 in 2012. Even after 4 years, the community is still going strong, especially when it went free to play in June last year. The game now profits from micro transactions, with the in game store you can buy hats, keys to open the crates you find, and weapons that wont give you an unfair advantage over another player. Team Fortress 2 receives at least one update a week, adding new items, and fixing some minor bugs, you don't get this with Call of Duty, you don’t have to pay for maps, maps are free for Team Fortress 2, and you don’t get Team Fortress 5, you wont get a new Team Fortress every year, so because of these updates, the game stays fresh and has a strong community that will last another few years. 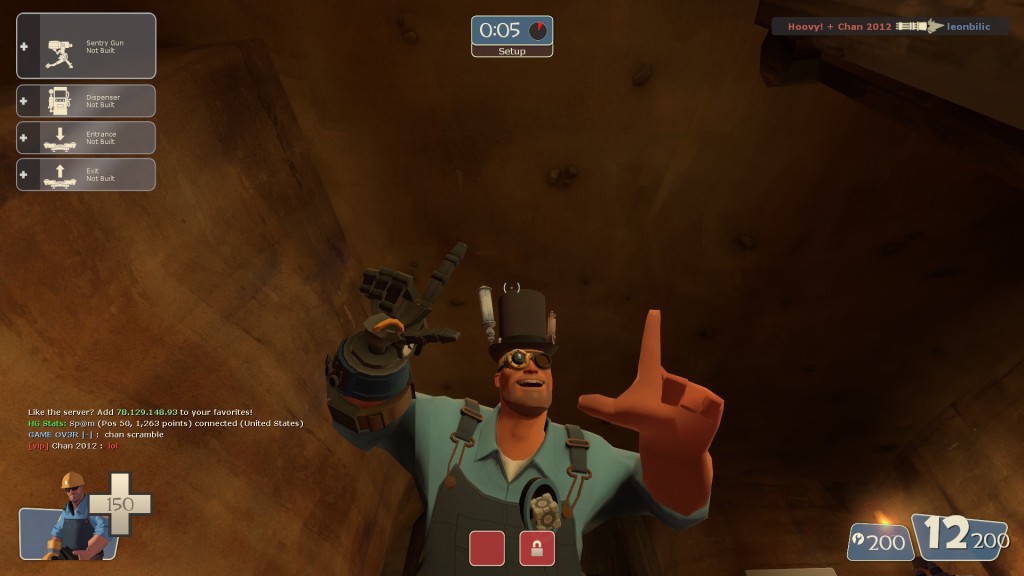 Team Fortress 2 is a class based multiplayer shooter, which you have to work as a team completing the objectives, there’s training where you can train with bots, and learn how to play, there’s crafting, where you can craft new weapons, hats, and metals with your unwanted weapons, trading, where you can trade with other players, the store, the replay editor that sometimes works, and of course the game, it has a server browser, so you can easy find a server you want to join. There are a variety of game modes to choose from, including community made modes, such as Saxton Hale, where everyone teams up to fight a Saxton Hale boss, which is controlled by a player. The main game modes, are payload where one team have to push a cart towards the end of the track, and the other team has to stop it, payload race same idea, but both teams have a cart, and race each other to push the cart to the end of the track first. Capture the flag, but it’s with brief cases, king of the hill, capture points, where both teams are fighting over the control points, arena where its team death match, but when you die your out, attack and defend, one team has to capture all three control points, whilst the other defends, there’s also a medieval version of this, where its set on a medieval map, and you can only use melee weapons, bows, and crossbows witch only the Sniper and Medic have. So there are plenty of game modes, as well as the community ones.

Since this is a classed based shooter, there are nine classes with their own advantages, and disadvantages, some servers have limits of how many on your team, can pick a certain class. There are a total of nine classes split into offensive, defensive, and support. You have a primary weapon, which is the main weapon what that class uses, such as a sniper rifle, rocket launcher, a secondary weapon such as a shotgun, or a pistol, and a melee weapon that can be a sword, or even a frying pan. 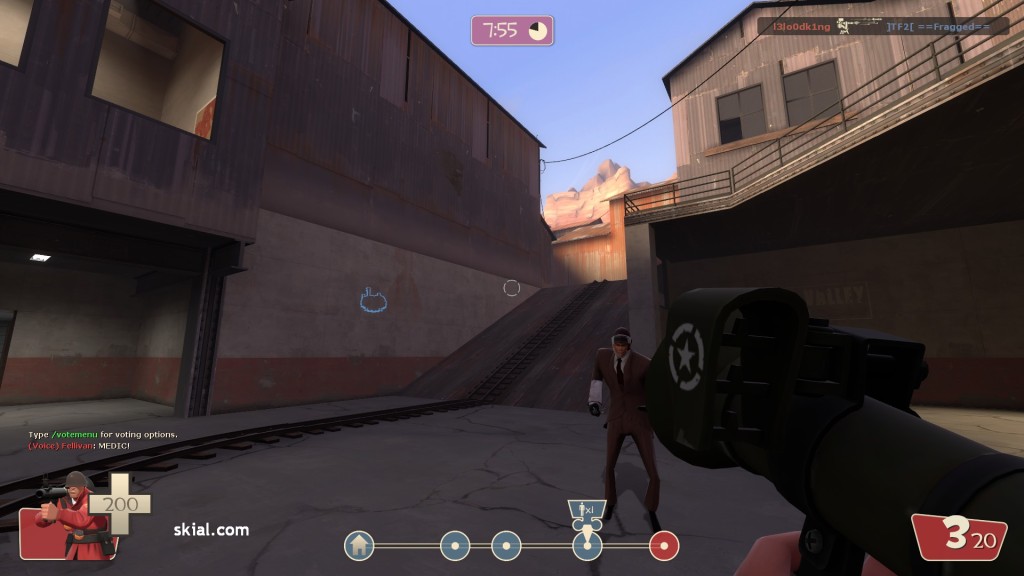 The offensive classes are Scout, Solider, and Pyro. The scout is fast on his feet, can do double jumps, capture points twice as fast, his weapons include baseball bats, energy drinks, pistols, and scatter guns, such as the force n nature. The solider can perform rocket jumps, with his rockets launchers, weapons include ray guns, shotguns, shovels, and of course rocket launchers. The Pyro loves to burn stuff, including spies and arrows, with the default flamethrower he can put out fires, air blast his enemies to the sky, and deflect rockets. Of course these things use ammo and good timing to perform. Other weapons include flare guns, shotguns and axes.

The defensive classes are great for defending points, these include demo man, heavy, and engineer. The demo man loves to use explosives; he has a grenade launcher, sticky grenades, where you can put them behind a wall, and when an enemy comes by BOOM! You can set these of by yourself. Other the years the demo man, turned into what some people like to call the demo knight. The demo man now has shields, and a large Varity of swords, n axes. The shields are secondary weapons, which are used for charging and resisting fire and explosive damage. And of course since the grenade launcher is a primary weapon, you can have a grenade launcher, and a shield. The heavy may have a lot of health, especially with a medic healing him, but he is a slow mover because of his love for sandviches, he carries a big machine gun, capable of tearing you apart if you get close to him. He loves to use his fists in melee combat, and carries food supplies and shotguns. The engineer likes to sit back and let his sentry gun do the talking. He can build teleporters for the team, and dispensers to heal and give ammo to teammates. If a spy destroys his sentry then a wrench to the face for him, and a shotgun for the other guy.

The support classes are used to give support to teammates, these classes are the medic, sniper and spy. The medic is a healer, he can heal injured teammates, and boost their maximum health, when the medics medi gun been charge, he can give a teammate a ubercharge, which make you and them bullet proof for a few seconds, The medic also has a syringe gun, used to pick of annoying scouts, and a bone saw. The sniper, is used to pick off enemies from a long distance, you can also cover enemies with a jar of wee that gives you and your team mates min critical hits on them, and can put out fires. The sniper can also use his trusty huntsman witch is a bow instead of a sniper. He also can wear a shield on his back that blocks a backstab, or give you more health, he like to use his sword up close and personal. The Spy is used to sabotage the engineer’s equipment such as the sentry, dispenser, and teleporters. He can also disguise himself as a player from the enemy team, so he can blend in, and back stab any troublesome enemies getting in the way, with a knife, he also has a revolver if everything else fails. 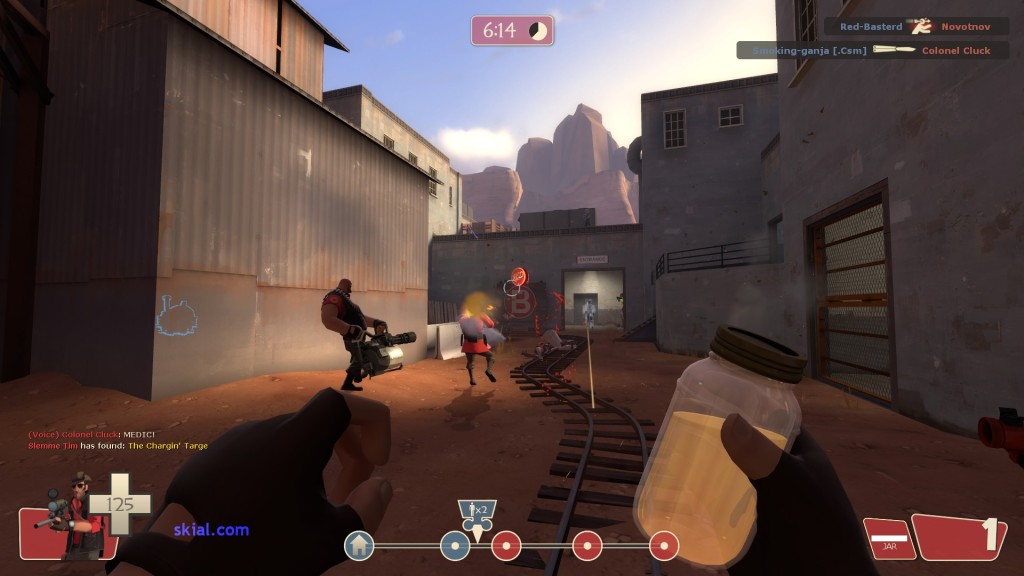 Team Fortress is very fun, and the graphics style show this as well, its more colourful and prettier than ever, thanks to engine updates and the really good art style that ages slowly. Yes hardly any browns here, it actually not dull, just a pleasant art style that makes it easy to indentify classes, and enemies. The classes each have a personality and character, they will shout out some nasty funny stuff to enemies such as when the Solider is dominating an enemy Demoman, he could say “Scotland is not even a real country, your just an English man with a dress” this of course is very offensive to the demo man since he’s Scottish, and you hear the demo mans Scottish accent from time to time. In fact you could call all of the classes characters, and they have more personality then some single player game with characters.

The sound is used good in this game well, the sound will help you to kill your enemies, you could sort of know where the enemy is, without even looking at them, for instance, you could hear the heavy’s chain gun spinning around the corner, know there’s a spy near by, thanks to the noise he makes when he de cloaks, you could hear splashes when the enemy is walking in shallow water near by, and of course the sound of the weapons, so you know which class is shooting near by. There’s also an announcer, who tells you have much time your have left, and some other stuff, which is a old crazy woman, she doesn’t constantly speak, just enough to let you know how much time you have left. The soundtrack is great, you hear it on the main menu, and Valve has made a theme for each character and more. The soundtrack matches with the characters, and game perfectly. 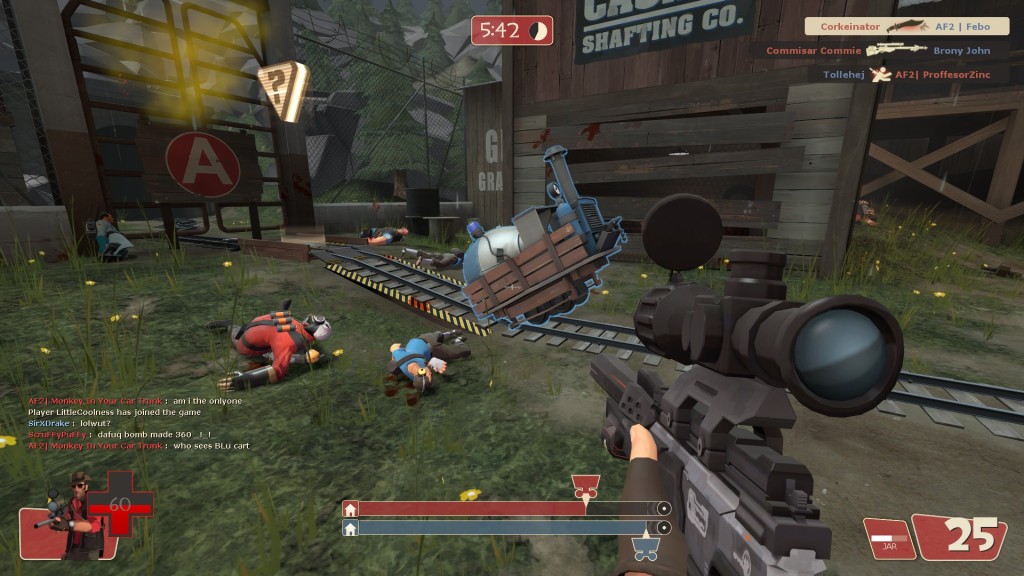 So what’s the deal with hats? Well they are used to make you stand out from the crowd, and to show of to other player how good you look, even if the other guy has a more rarer hat then you, you could have the better fashion style. So how do you get these hats? Well you could be lucky enough to find one in a drop, drops are items you find when playing, all you do is play, then when you die, a screen could appear telling you found an item, if you lucky this could be a hat. 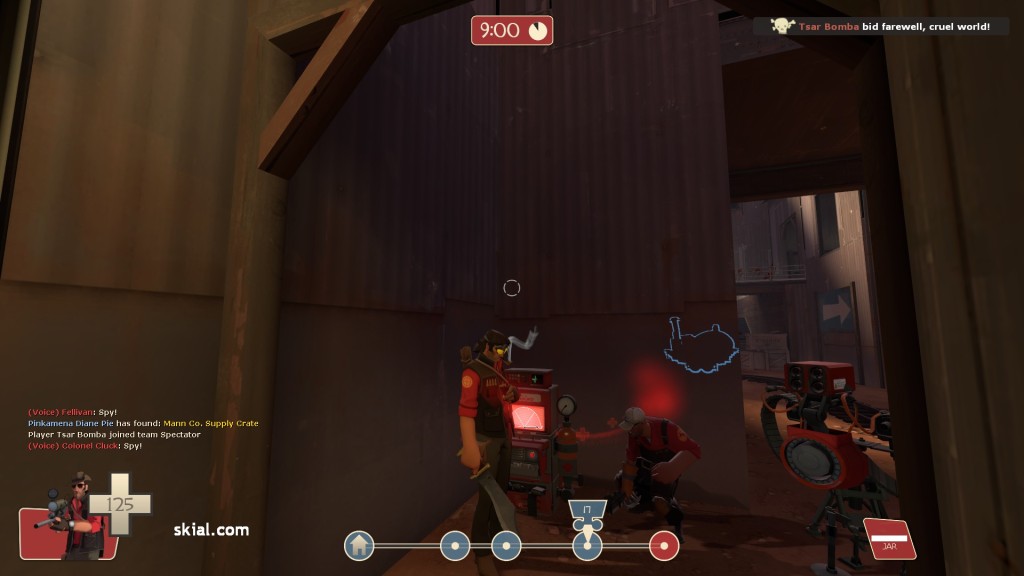 You could craft a hat using 3 refined metals, so around 54 smelted weapons, now that sounds a lot, but you could always buy one, trade for one, or get a genuine quality hat, a promotional item for pre ordering a game on steam.

So is this shooter worth a download and your time? Yes absolutely, its just fun all round, the source engine is optimized for all types of PCs including Macs, so you should not have any trouble running it unless you do need a new PC, its not too serious where a player insults you like crazy because made a wrong turn, anyone who loves first person shooters and fun should download this now, if you already have not.