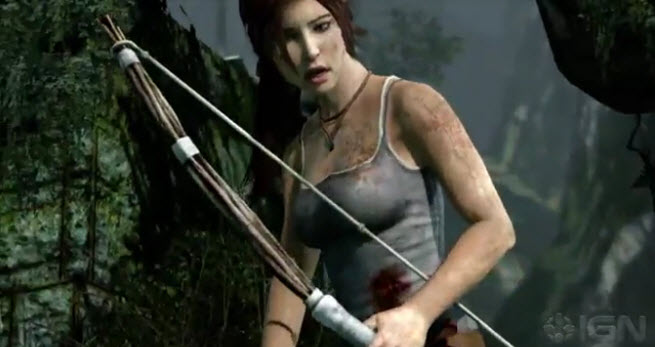 E3 is just around the corner and that means it’s time for another eye-popping Tomb Raider trailer.

In the video, you can see the young Lara Croft grow as a character from vulnerable victim to a seasoned killer. The Lara Croft of this game, we know from last year’s initial revelation, will be a 21-year-old young woman who looks far more innocent and vulnerable than the hardened, swaggering adventurer of the earlier games. She shoots a deer with a bow and arrow, and then apologizes.

Then she kills a man trying to rape her, and emerges terrified by terrifying as well, with blood all over her face. She laments that she had to kill the man, and that is how she grows up. Later in the video, we see that Lara is involved in some fast-action combat scenes, fleeing enemies and saying, “I hate tombs.”

The game has good graphics, but the video itself doesn’t always reflect that. The quality is kind of mixed. At the close of the video, the company reveals the launch date as March 5, 2013.

The reboot of Tomb Raider by the division of Japan’s Square Enix is perhaps the most important project in this generation of video games. More than 35 million Tomb Raider games have been sold, generating revenues that are likely well above $1 billion. If the developers pull this off their risky project, Lara Croft could live on for generations of fans to come. Check out the video here.