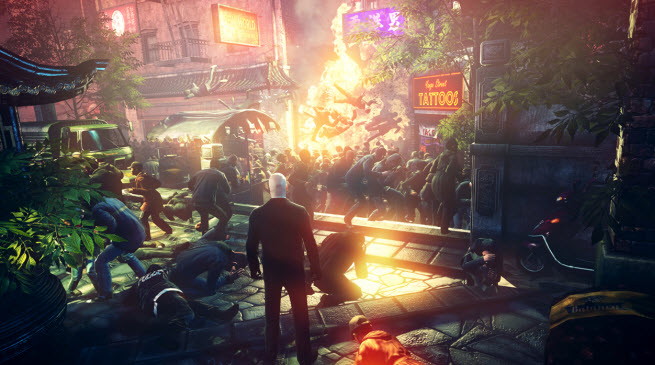 Hitman Absolution is shaping up to be one of the most interesting stealth games of the year. Square Enix showed it off recently and we got a hands-on preview of a level where the cold-blooded assassin Agent 47 has to infiltrate a crowd in Chinatown to perform a hit.

With the game’s Glacier2 engine, the developers have been able to create giant crowds of 500 or so people, each one of them with individual facial expressions and characteristics. We got a hands-on look at how this system works and how tough it is to be a hitman. This game being developed by IO Interactive is one of the major titles of the year 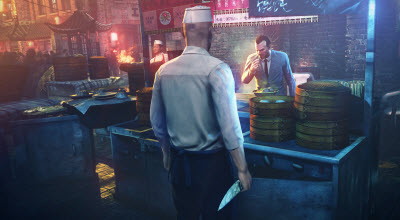 In Chinatown, Agent 47 has to locate a target who is a drug trafficker. The target man is protected by police in the middle of a pagoda in a large square full of people. It isn’t possible to just sidle up to the man and shoot him — at least without getting caught and killed yourself. The cool thing about the crowd is that any one of the 500 people can give you away. If you pull a gun, the people near you will recognize it and sound the alarm. A bunch of cops will come running to take you out.

As the agent moves through the crowd, he overhears things such as the target talking to someone on a phone. But if you, as the player, move the agent too close, the guards will notice that you are trespassing. You have to be clever about your kill, and you have a variety of ways you can pull it off.

If you pull the R2 bumper button, you get some clues. You can follow a courier to a corner, kill him with a knife, take his clothes, and then hide his body. Then you can get closer to the target without arousing suspicion. 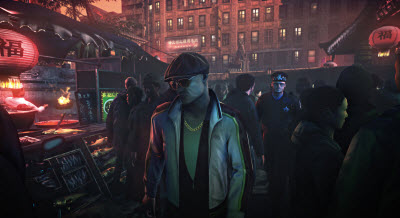 You can sneak into a security room, view a security tape and erase it. You can dress up as a cook and create a poisoned version of the fugu fish that the target likes to eat. You can go up to a second story apartment and take the target out with a sniper rifle. You can also plant a bomb, but then you’ll take out a lot of innocent people in the crowd. It’s a not what you would call an “elegant” hit, in the words of art director, Roberto Marquesi of IO Interactive.

The graphics of the scene look great, with bright red lanterns and I tried to poison the guy. First I had to follow a chef to a remote corner. Then I stabbed him with a butcher knife I had taken from his kitchen. I took his outfit and then dumped him in a dumpster. No one saw me, even though there were lots of people a few feet away. It was kind of nerve-racking. Then I wandered around the square, making my way through the crowd. I wanted to poison my target.

But every time I walked near a food vendor, it would raise an alarm. The vendor would recognize that I’m wearing a chef’s outfit, but they would also know that I’m not really part of the food work crew. They would become suspicious. Eventually, one started following me. I walked into the crowd to shake the man. But he stayed on my tail. Then he brought the cops down on me and I was history. You can replay this kind of mission over and over again, without ever doing the same thing twice. 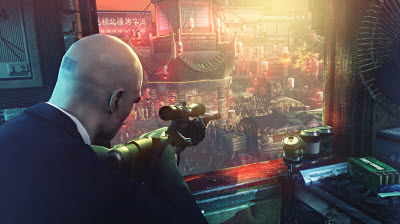 We did a video interview with Marquesi of IO Interactive.

Check out the over-the-top “Attack of the Saints” trailer below. It may become better known as the “nuns with guns” trailer.