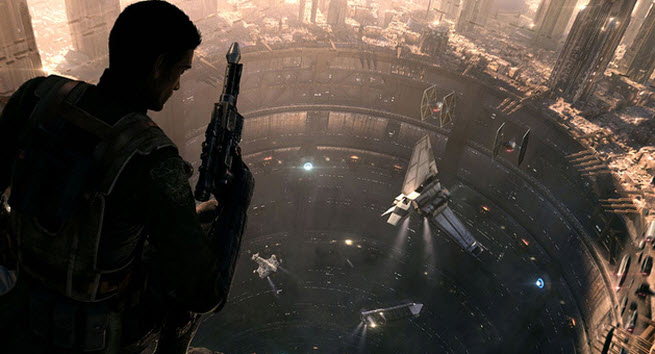 LucasArts has taken the wraps off a new game dubbed Star Wars: 1313. The cryptic title is a “third-person cinematic action adventure game” and is named after Level 1313, a “ruthless criminal underground deep below the surface of the planet of Coruscant.”

That sort of sounds like Grand Theft Auto in space. You will play as a bounty hunter who “uses human skills and gadgets, rather than supernatural Force powers, to make his way through this dangerous world.”

Some speculated that the game would star Boba Fett, the bounty hunter character from the films, but the character shown here certainly isn’t Boba. The game appears to have a Mature rating, since you have to enter your birth year to get into the website. We hear that the game has been in the works for a few years and is being built by LucasArts’ internal game teams.

Paul Meegan, president of LucasArts, said, “We’re excited to share one of the projects LucasArts has been hard at work developing. Star Wars: 1313 dives into a part of the Star Wars mythos that we’ve always known existed, but never had a chance to visit. We are committed to bringing the best gameplay experience and visual fidelity to life, and I truly believe the work we are showcasing at E3 will speak for itself.”