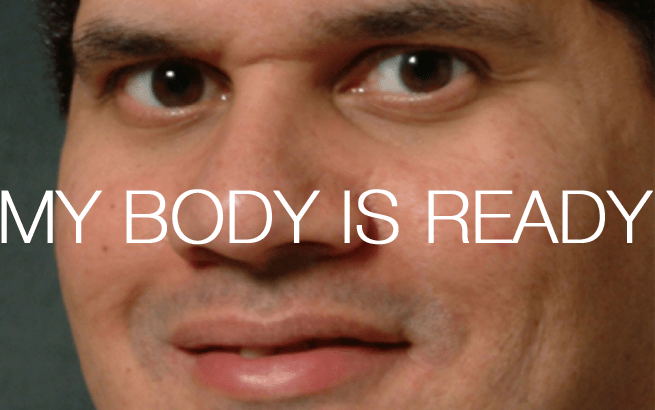 It’s the weekend before the Electronic Entertainment Expo in Los Angeles. In less than 48 hours, the first press conference will kick off a week overloaded with new games and big surprises, but that’s only half the fun. Sure, we love seeing fresh software at the industry’s largest trade show, but the presentations are often memorable for an entirely different reason: the memes.

Each year, a world-wide audience of gamers collaborate to create Photoshop jokes and animated gifs based on the most awkward and odd moments of the show. In preparation for E3 2012, we’ve looked back to remember some of our favorites from years gone by.

By 2006, when Kaz Hirai went to exhibit Ridge Racer for the PlayStation Portable, the series was over a decade old. Sure, the arcade-driving game had its fans, but Hirai seemed under the delusion that it was the killer app the company’s handheld device needed to rile up the hardcore gamers. The audience didn’t have much of a reaction even when he mimicked the “RIIIIDGE RACER” chant from the opening of the original game. Or maybe, especially when he mimicked the original game.

During the 2006 Sony stage show, developer Game Republic showed off its Genji: Days of the Blade for PS3. The producer on the title, Bill Ritch, pitched the game as featuring “famous battles that actually took place in ancient Japan.” The very next moment, a giant enemy crab the size of a house jumped onto the screen. Which means either those Akira Kurosawa films are terribly inaccurate or Bill Ritch doesn’t know what the word “actually” means. In the course of fighting the GEC, Ritch inflicted “massive damage” upon the sea creature which became a meme of its own.

The reference filtered into other games. Scribblenauts for the DS has a “giant enemy crab” available for summoning. The Simpsons game for Xbox 360 has a Giant Ancient Crab exhibit that is shuttered due to “massive damage.” Motorstorm for the PS3 has a class of tracks titled “Giant Enemy Crab.”

Translating on the fly is probably a difficult job. Apparently, some professional interpreters use pen and paper to take notes so they don’t miss huge chunks of what their subject is saying. Unfortunately, that led to Gran Turismo producer Kaz Yamauchi’s translator looking bored and uninterested throughout his entire talk.

Everyone looks stupid when they play Wii and Kinect games. That even goes for the people who make them. Since Nintendo introduced its waggle-based console, we’ve been able to rely on executives and hired actors forced to make fools of themselves. The best examples:

This industry has very few executives who can get up on stage and speak convincingly to the press. The list consists of Nintendo of America President Reggie Fils-Aime, EA Chief Operating Officer Peter Moore, and maybe one or two others. Guys like Don Mattrick and Jack Tretton are probably very good at their jobs, but they don’t have that same confidence when pitching their products to professional writers. Last year, Ubisoft decided to outsource that public-presenter role to Aaron Priceman, or Mr. Caffeine as he is known. It didn’t go well.

Gamers knew they were in for a wild ride the moment Mr. Caffeine walked on stage with his wireless headset microphone. It looked like he may have rolled straight over from the set of an infomercial (entirely possible). He then proceeded to drop flat joke after flat joke. Between his mispronunciation of Tom Clancy as “Kuh-lancy” and his timely approximation of the Wayne’s World flash-back noise (doodla doodly doo!), Mr. Caffeine was a meme factory.

In 2007, our bodies became the controller, and Nintendo hype-man Reggie Fils-Aime showed us how. To help Nintendo designer Shigeru Miyamoto demonstrate the Wii Fit Balance Board, Reggie walked on stage and gave us the unofficial motto of E3 and life: “My body is ready.” The phrase caught on quickly and has become a regular part of gamer parlance.

Did we forget your favorite meme? Be sure to hit up the comments with your favorite E3 moments. And check back throughout the week as we bring you the latest Photoshops and animated gifs from E3 2012.