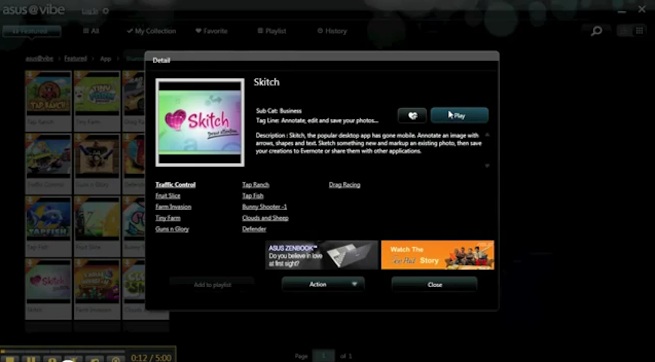 Having an Android device is no longer a requirement for Asus device owners that want access to the vast library of Android apps thanks to a new partnership between Asus and Bluestacks announced today.

Bluestacks is an incredibly cool company that’s developing technology allowing people to use Android apps on Windows machines. It’s essentially doing for Windows what Parallels does for Mac owners that want to run Windows programs. However, Bluestacks’ strategy is focused on blurring the lines between mobile and desktop apps.

Per terms of the partnership, Bluestacks is integrating this technology within Asus Vibe, an entertainment platform that comes preloaded on all Asus desktops, notebooks, Eee PCs, and other devices made by the company. The Vibe platform will launch with the new Android player ability at this year’s Computex event, and provide users will access to

“Our strong portfolio of apps from top developers, combined with our unique monetization engine makes this a revenue-generating opportunity for PC OEMs,” said Bluestacks President and CEO said Rosen Sharma in a statement.

Check out a demo video of Asus’ Vibe platform below, courtesy of Bluestacks. It starts by showing off the ability to run visual notation app Skitch — traditionally used by only mobile and Apple users — on a Windows machine.

Founded in 2009, the San Francisco, Calif.-based startup has offices in India, Taiwan and Japan. The company raised $10.6 million in funding back in September 2011.