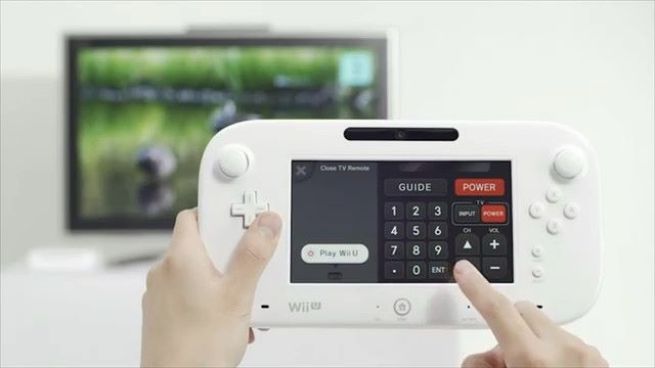 Nintendo wants to make the newly renamed Wii U Gamepad the center of your living room. Not only will the tablet-like controller be used to manipulate your games, but it will include a “TV” button which will make the device act as your cable box’s remote, even when the Wii U is turned off.

Previously, we noted that it looked like the Japanese-based corporation had made some revisions to its controller hardware. That is confirmed. On the left side of the Gamepad is a near-field-communication reader/writer tab. Users can swipe NFC-enabled items near the remote to activate wireless communication. Activision’s platformer Skylanders: Spyro’s Adventure used this technology to allow real-world toys to be placed in the game by setting them on “The Portal of Power” which was a NFC device that plugged into consoles via USB. Skylanders was a huge financial success mainly due to the merchandise sales. Nintendo likely hopes to implement a similar strategy by making the whole process easier with its built in NFC reader.

The company’s president, Satoru Iwata, unveiled the additional details about the Gamepad during a special pre-Electronic Entertainment Expo video that aired on Nintendo’s official website. Other news from the video includes details about Nintendo’s Miiverse online service and the Wii U Pro Controller. The presentation was sparse on new games, although the image at the top of this article looks like it may have a fuzzy image of a new Pikmin title on the TV in the background.

Iwata confirmed the Gamepad will use IR technology to speak with big screens and cable boxes, so it should be able to work with anything in your living room.

The Wii U is expected to launch this fall. We’ll have more information including a hands-on impression this week. Be sure to follow all of our coverage here.