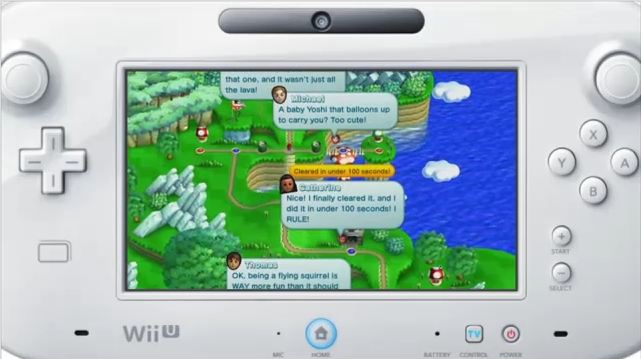 The upcoming Wii U system, due out by the end of 2012, along with its (pictured above) Gamepad controller (the new, official name), will allow players to access an always-on network of connected gamers. A stream of posts will alert Wii U owners to their friends’ achievements and Twitter-like messages in their games.

Iwata emphasized that the Miiverse is natively integrated into every level of the Wii U and its games. From what was shown, this could make the social aspect of Xbox Live look antiquated by comparison. Instead of simple cross-game voice chat, Miiverse will provide data from your friends even in the games themselves. For example, in what looked like a New Super Mario Bros. overworld screen, players were leaving notes about levels as they play them. Those messages then get filtered into other players’ games, which could create a high level of connectivity and togetherness. It’s like leaderboards on PCP.

Since the service is available online, Nintendo will make Miiverse accessible on PCs, Macs, and smartphones. Iwata didn’t say they were working on an iPhone or Android app; instead he seemed to suggest the online network would be accessed via your phone’s browser.

Other features include video chat, hand-written text messages with the Wii U Gamepad’s stylus, and the ability to instantly upload screenshots from your game.

In the Nintendo Direct video, the publisher also revealed new information about its Wii U Gamepad and the Wii U Pro Controller.

This announcement from the Japanese hardware company represents a 180-degree change from the Internet strategy of the last two Nintendo systems, the Wii and GameCube, which treated online as an afterthought (or no-thought, when it came to the GameCube). It was clear that the Wii U would have to bring something along these lines, but it is still surprising to gamers conditioned to think that Nintendo will never catch up to Microsoft and Sony.