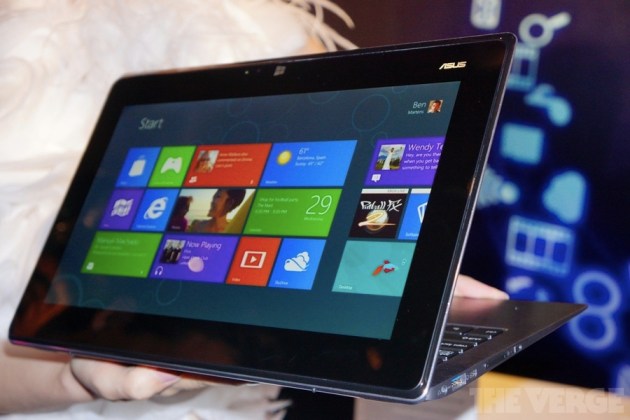 If Windows 8 has been home to anything so far, it’s unique form factors. Now Asus is further adding to that perception with its own hybrid tablets running the upcoming OS.

Channeling Lenovo’s Ideapad Yoga, Asus is doing something interesting with the Taichi, a Windows 8 device that bridges the gap between the laptop and tablet by being both at the same time. Featuring a screen on both sides of its lid, the Taichi can be used as a keyboard-equipped laptop when open and a touch screen-enabled tablet when closed. The Taichi debuted at the Computex 2012 conference in Taipei.

Asus’s unconventional take on the tablet form factor can be seen elsewhere as well. With its detachable keyboard, the Transformer Book, for instance, is the Windows 8 equivalent to the Transformer Prime. The device runs on Intel’s Core i7 Ivy Bridge processor and features NVIDIA graphics, 4GB of RAM, and solid-state storage.

And then there’s the Tablet 600 and Tablet 810, which run on ARM and Intel Atom processors, respectively. Like the Transformer Book, both devices feature detachable keyboards.

While all of the Windows 8 announcements might suggest that Asus is abandoning its Android efforts, that couldn’t be further from the truth. The company also announced the All-in-One Transformer, an 18.4-inch desktop that is capable of running Android alongside Windows 8.

Windows 8 support will be out in full force this week, as both Toshiba and Acer are expected to announce their own tablets running Microsoft’s upcoming operating system in the coming days. Let’s just hope they are as zany as what Asus has shown so far.

Taichi photo via The Verge