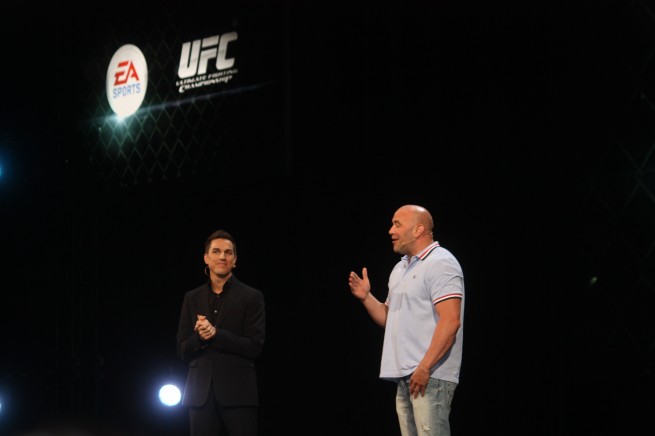 “We’re incredibly pleased to announce today the start of a multi-year, multi-game partnership between EA Sports and the UFC,” the head of EA Sports Andrew Wilson said on the stage of EA’s Electronic Entertainment Expo press event.

This will put an end to the UFC’s previous deal with publisher THQ, which developed three UFC Undisputed titles in the last three years.

“We’d like to thank THQ for creating some of the most critically-acclaimed sports videogames of this console generation, and we’re excited to enter a new relationship with EA that will help us deepen our connection with fighting fans around the world,” said UFC president Dana White. “There’s no one better at creating authentic sports videogames than EA SPORTS, and we’re excited to have a partner who shares our vision of deep, connected, and multi-platform global game experiences.”

This strikes a slightly different tone than what White was saying about EA in 2009. “[EA] told us [it] would never be in business with us. They wouldn’t even take a meeting because mixed martial arts disgusted them,” White said to MMAJunkie after discovering that EA was going to make its own MMA game. “This wasn’t a real sport, [EA] said. Boy, they got over that real quick, didn’t they?”

Clearly, this is a better deal for the UFC and for EA. The UFC is likely getting more money from the better funded EA, and the publisher can reach more gamers with a properly licensed MMA sim. However, it may not be best for fans of quality UFC games.

Previously, EA tried to compete with the THQ UFC games with its own EA Sports MMA. Critically and commercially, the UFC’s Undisputed titles are widely seen as the superior products. UFC Undisputed 3, released in February 2012, earned an 86 on Metacritic. Meanwhile, EA Sports MMA earned a 77 on the same scale.

No product was announced and no date was attached to the announcement.