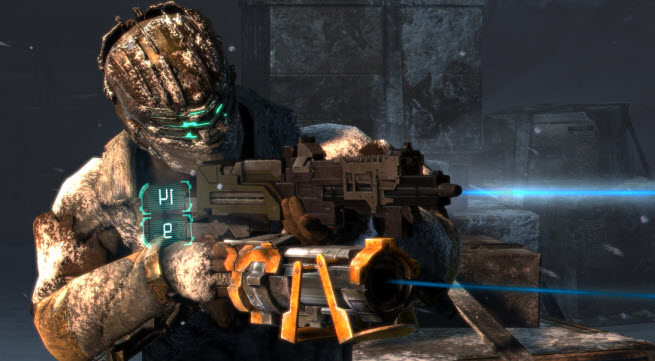 Electronic Arts has taken the wraps off Dead Space 3, the newest entry in a series that has ingrained the phrase “strategic dismemberment” into a generation of gamers.

The game has been rumored for a while, and EA is talking about it today at its press conference at the industry trade show Electronic Entertainment Expo. But we got a hands-on preview of how the game will actually play, particularly with its new drop-in-drop-out co-op mode. With it, a friend can join you as you take on the slimy alien Necromorphs on a new icy planet called Tau Volantis.

Peter Moore, chief operating officer at EA, said in a presentation to journalists that he passes by the fourth floor office of Visceral Studios at EA’s headquarters in Redwood City, Calif. every day.

“I hear these blood-shrieking growls,” he said. “It’s real.”

In a trailer, EA showed that the reluctant hero, mining engineer Isaac Clarke (named after sci-fi writers Isaac Asimov and Arthur C. Clarke), must once again deal with the shrieking monsters that want to bite his head off. But this time he’ll have access to a new range of weapons, including some that can be bundled together, as in the picture above.

Dead Space is gathering momentum as a franchise. The first title debuted in 2008, and it sold more than 2 million copies. The sequel came out in 2011, and it sold several million units. That’s only natural since there are many more next-generation consoles in the market, but it also means that the gaming experience is getting better.

“When this started, it was six of us making a super cool space horror game,” said Ian Milham, franchise art director for Visceral. “Look who’s a big franchise now. Put that in your pipe, Madden.”

Dead Space 3 should be appealing to fans because it offers the same cinematic horror experience with bigger and uglier Necromorphs attacking you from all sides and jumping out of dark corners. Isaac’s ship crash lands on the ice planet and

“We just make really good action games,” Milham said. “That is what we are doing. A lot more of it, doing it bigger. There are more Necromorphs, new enemies, and a new story.”

In the game, you have to scavenge for resources, upgrade your suit, unlock secrets, and kill a lot of big Necromorphs. The drop-in, drop-out cooperative gameplay is cool. As you battle a giant spider on your own, you have to deal with attacks coming at you one after another. But when a co-op player joins, you are aided by the hardened soldier character, John Carver. The actual set-up of the scene changes so that Carver and Isaac have to work together to do things like make lifts work. Now, with another player at your side, one of you can shoot out the legs of the Necromorphs and the other can take off their heads.

In one scene, Isaac gets locked into a circular arena with a giant drilling tool that seems to come down randomly to smash anything near it. You have to dismember and shoot walking Necromorphs, and deal with a big boss character that can only be taken out by the giant drilling tool. The result is one of those “easy to learn, difficult to master” fighting scenes.