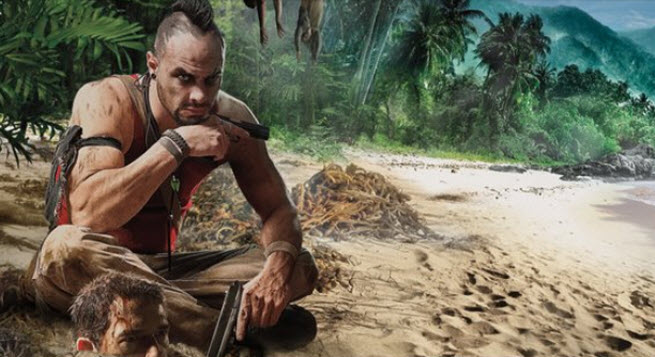 The images in Far Cry 3 are unforgettable. They’re either beautiful or horrific. Not so much in between.

Ubisoft is showing this big-budget, open-world, first-person shooter game once again at the Electronic Entertainment Expo (E3), the industry’s largest trade show, in Los Angeles, Calif. A year ago, the company introduced the story, the main character, and the villain. It was creepy to see such unrestrained violence right next to the beautiful, realistic graphics of an island paradise. Now, the more Ubisoft shows, the more intriguing this game gets — and the more insane.

In the game, you are Jason Brody. Your girlfriend is missing. You’re stranded on a beautiful tropical island. And the mercenaries on the isle are psychotic. No one is quite as crazy as this character, Vaas (pictured above). He says the definition of insanity is “doing the same thing over and over again and expecting shit to change.” He adds, “The first time somebody told me that, I thought they were bullshitting me. So, boom, I shot him.”

He complains, “I already killed you once” and then tries to drown Brody once again. Brody survives, strangles a guard under a beautiful waterfall, and then he starts looking around for a way out. The mercenaries are murdering everyone. Then the combat starts, either loud or quiet. Your choice. You pursue Vaas throughout the game, and he gets tired of killing you (or so he thinks) over and over again. With Vaas, I have no doubt that Ubisoft has created one of the most memorable villains in games.

“He is indeed an incredible bad guy,” said Yannis Mallet, head of the Ubisoft studios in Montreal and Toronto. (Ubisoft Montreal is creating the game).

From the beginning of the new demo, things are different. You wake up with a skin-painted, nearly naked islander woman sitting on top of you. As you get up, you see a bunch of natives doing a dance to the sound of drums. You walk to a cliff and then dive into the see-through blue-green ocean. You swim under water until you get to a dock. There, you pull down a guard, stab him, and turn the ocean red.

Then you get up and walk into the jungle. You see two guards talking. You can shoot them or go up to one quietly and slit his throat with a knife. Then, by pushing the left joystick in the correct direction, you can immediately move to slit the other guard’s throat. You pick up a bow and arrow and use it on the next sentry, who is standing on a tree platform. Then you infiltrate a compound with big walls. There are tigers there, and you shoot the cages to let loose the powerful cats, who then attack the guards in the yard.

At that point, it’s time to open up with your semi-automatic rifle and greet all of the guards that you can. You can blow up cans of gasoline to take out multiple enemies at once. But if you aren’t careful, the enemies will flank you and bring you down. At some point, you break into a warehouse and fight in the near darkness. Then it turns into a kind of weird fun house.

Once you start walking through the warehouse, you find that somebody is trying to drive you insane. There are dozens of TV sets all broadcasting gibberish. It’s as if you’re in a drug-induced nightmare. Far Cry 3 is a beautiful shooting game, but the story about lunacy may make it into something all together different from what you would expect with such a game.

With cooperative multiplayer, you team up with three other players and go on missions. You first have to repair a train car and then kill everyone trying to stop you from doing that. In that scene, three shooters have to stand guard over the one repairing the locomotive. Then you walk over to a bridge and get some target practice with sniper rifles. (I won the contest of shooting the most mercenaries). Later in the game, there is an entire archipelago of islands to explore.

The game uses the new Dunia 2 engine with a physics system integrated into it. It is under development at Ubisoft Montreal with help from three other studios. The title looks lovely.

The game debuts in September on the PC, PlayStation 3, and Xbox 360.