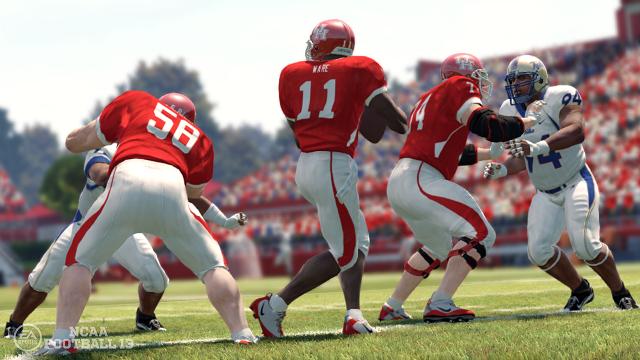 Electronic Arts has come up with a clever way to bring some star power to NCAA Football 13. Since it isn’t allowed to license the likenesses and personalities of current student athletes, the company’s EA Tiburon studio instead created the Heisman Challenge mode. Now players can choose between 16 previous Heisman Trophy winners and play out some of their career highs. As fun and glamorous as that sounds, this mode adds a sort of weird vibe of individualism to this team sport.

When I previewed NCAA Football 13 at a recent event in Los Angeles, the developers stressed that the Heisman Challenge mode is there to let players feel what it’s like to dominate the competition. As a result, every play available centers around the star. I chose to play as acclaimed running back Barry Sanders during his time at Oklahoma State. 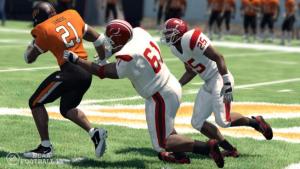 I got to watch these short vignettes of Mr. Sanders talking about his experiences and career. I found those talks to be entertaining, and I can see fans enjoying the behind-the-scenes look.

The part that I found interesting, though, was how the actual gameplay is centered around the individual. As long as the offensive line did their job, I had very little trouble running through the gaps they created in the defense and reaching first downs every other snap. Sure, I technically couldn’t succeed without their help, but the supporting cast is all pretty generic and forgettable (especially without any licensed personalities).

When things got a little hectic along the line of scrimmage, I pulled one of the triggers to activate the Reaction Time feature, which slows down all of the action and let me more easily avoid the opposition.

These mechanics are, of course, necessary to accomplish the goal in Heisman Challenge mode: achieving or surpassing the records each trophy winner had in his winning season. But then, what’s a team sport when all you’re focused on is your personal stats?

Better yet, whenever Oklahoma State was on defense, and Sanders wasn’t in, I didn’t even have to do anything! I just sat and waited for when it was time for me to go back in and score some more touchdowns. If I got impatient, I didn’t have to wait for those sections to pass. I could just skip whole chunks of the game until it was time to get back on the field. 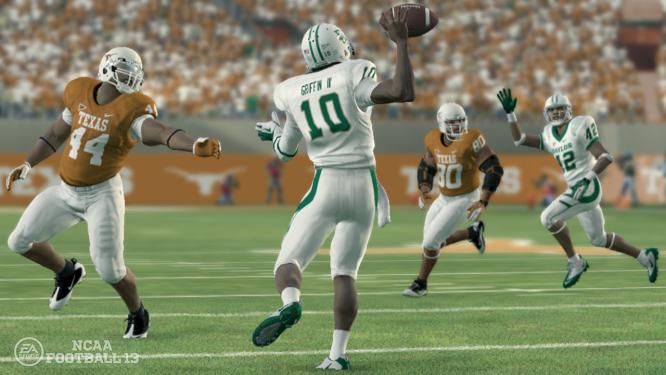 Obviously, sitting around and not playing is boring, so that option makes sense. I just find it funny that this mode really feeds the ego of fans who want to be successful by playing vicariously through these Heisman Trophy winners. These real athletes did work as a team. They didn’t have every single play centered around them, and couldn’t just skip portions of the game when they weren’t playing. I get that it makes for a more entertaining video game, but it also goes against what most coaches teach their players in team sports.

But I suppose if you don’t like what your coach has to say, Heisman Challenge mode also lets you take your athlete to another university. Do the school units transfer over OK? What happens to the player’s scholarship? The developers laughed when I asked about those things. I suppose I wasn’t entirely serious, but I also said them to point out how silly I found the idea of a college football superstar being able to just switch schools on a whim.

Some guys get all the glory, and in Heisman Challenge mode, that can be you. In this particular section of NCAA Football 13, team is spelled with an “I,” but that’s OK. After all, it doesn’t matter if you win or lose but just how you play the video game.