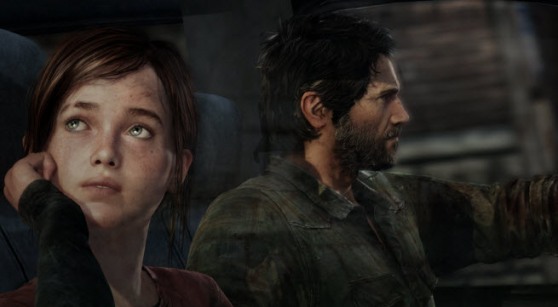 Sony closed its press conference today with a demo of a new scene from The Last of Us, the action-adventure game coming from the rock star development studio Naughty Dog.

The demo got a roar of applause at the Electronic Entertainment Expo (E3) press conference, and once again I was struck by how the game makes a huge emotional impact with so few actual killings. The Last of Us takes place after a plague has wiped out most humans on earth. Big cities are overrun with natural greenery. And survivors are brutal and merciless. The story focuses on Joel, a middle-aged man who has combat experience, and Ellie, a 15-year-old girl who has known nothing but the ruined world. Sony has slowly been revealing the game since last fall, and each new scene is better than the previous one.

In this scene, Ellie and Joel move through a city, talking with each other about things like the movie posters they see. The relationship between these two companions shows through, with Ellie always asking about what it was like before the plague. She asks Joel if he ever stayed in a nice hotel, and he says he could never afford it in the past. They walk into what was once a nice hotel but is now in a state of decay. Then they hear human voices — a group of armed gang members.

Joel sneaks up on one of the gang members and strangles him with his forearm. He is discovered and shoots another with his pistol. Not every shot hits, but the ones that do can take out a person easily. As they move from room to room, they hide so they won’t be surrounded by the rest of the gang. Ellie hugs the wall and asks, “What do we do now?” She seems helpless.

Joel grabs a leader and holds him hostage while he faces down another gunman. Then he shoots the gunman and beats the leader to death. He throws a firebomb at one guy and lights him on fire. Then he clubs another guy to death in an intense hand-to-hand battle. There’s lots of yelling and grunting. The last of the enemies jumps Joel while he is recovering from that battle. But Ellie jumps on the enemy’s back and stabs him. The guy throws her off, but Joel gets up and clubs him with a shotgun. The man begs for his life, and then Joel shoots him in the face.

This game is almost movie-like in its ability to blow you away. The deaths are incredibly violent and disturbing, but the game lingers over each one of them.  By comparison, I’ve probably shot more than 2,000 people in Max Payne 3 so far, and it has nowhere near the same kind of emotional impact.

The more I see of this game, the more I like. Jack Tretton, head of Sony’s game business in the U.S., said the scene was incredible and showed just how good Naughty Dog, which is one of 15 major studios owned by Sony, really is. The demo was probably the best of the event, next to the new Beyond game from Quantic Dream.