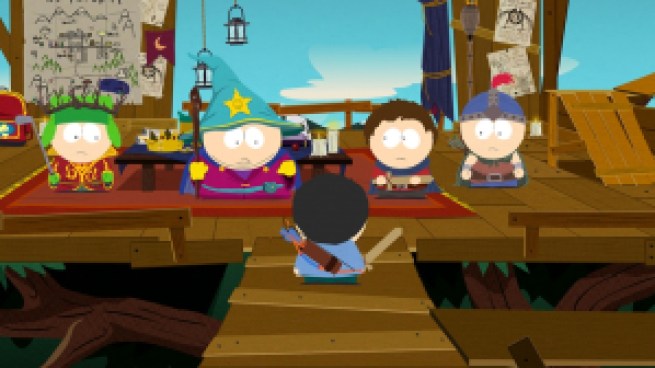 Developer Obsidian Entertainment has worked closely with South Park creators Matt Stone and Trey Parker to fully realize the world of the show in a new role-playing game dubbed “South Park: The Stick of Truth.” Players control the new kid in town, who is attempting to become the fifth member of the South Park crew. You’ll get to play along with Kyle, Stan, Kenny, and Cartman with your own created character.

“How many times have you been watching an episode of South Park and thought, ‘I’d like to watch this on my television, while hooked into my mobile device, which is being controlled by my tablet device, which is hooked into my oven, all while sitting in the refrigerator,” Parker said in an obvious jab at Microsoft’s SmartGlass. “Well, we’re not doing that. We’re just doing this game. It’s an RPG.”

Microsoft showed off the game at its Electronic Entertainment Expo press briefing today in Los Angeles. The role-playing game looked nearly identical to the show.

“To make the game feel like [you are in an episode of South Park], it has to look right,” Stone said when talking about The Stick of Truth from the stage of Microsoft’s presentation. “It has to look like an episode of South Park … which is pretty crappy.” Stone gave Obsidian a lot of props for getting the visuals up to Stone and Parker’s standards.

Parker and Stone also revealed that for the first time ever, they’ve mapped out the fictional town of South Park because of this title. “The funny part is, we were writing it, and saying, ‘Maybe you’re here and you go to Stan’s house to Kyle’s house,” Parker said. “And after fifteen years of doing the show, it was the first time that Matt and I were, like, ‘Where is Kyle’s house?'”