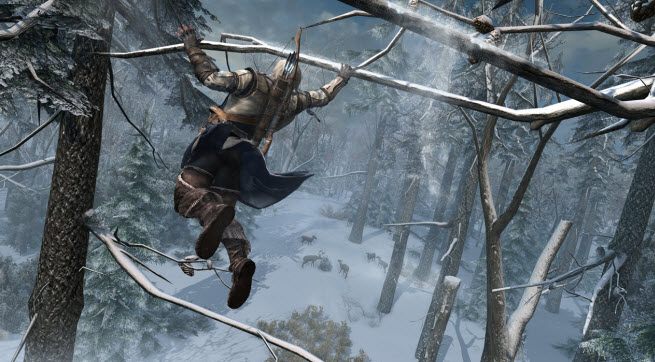 Ubisoft needs to pump new life into the Assassin’s Creed video game franchise, which has a new edition annually like clockwork. This year, French game publisher is using the American Revolution to create a new gaming experience in Assassin’s Creed III.

The game, which is actually the tenth title in the franchise, has become Ubisoft’s most important intellectual property. The publisher has hundreds of people working on Assassin’s games, but it’s time to shake things up with a title that isn’t a reskin of previous games. With the new hero of Assassin’s Creed III, the company hopes it has done just that, said Alex Hutchinson (pictured below, right), creative director for the franchise, in a recent demo for journalists.

“We have a new environment and a new character,” he said. 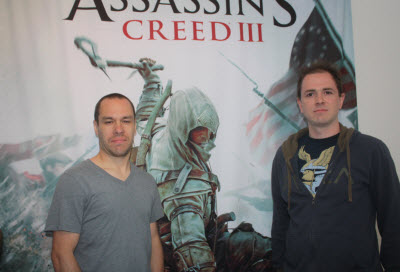 The new demo takes place in New England in the winter of 1776, the year the American Revolution began. As such, the game will teach players about history and take them into an environment that they haven’t seen in any other recent major game. That’s a strategy for keeping the franchise fresh. The redcoats have guns, but they’re no match for a trained assassin.

The story introduces Connor, the new protagonist, who has an English father and Native American mother. He was raised by the Mohawk people, and he is fast. We see animals running through the snow in the woods. Connor zips through the trees. He finds a branch to step on. Then, parkour style, he shifts his weight so he can use the branch to spring to the next one. He goes so fast through the trees that he dives down on top of the deer and kills one with his hidden blade.

Connor then takes the deer meat to a camp of American soldiers. He sells the meat and then gets a mission to do from a doctor. It’s odd that Connor stands out because he wears the familiar Assassin’s hood. He is the only one wearing such a garment, and that is a constant reminder that this story isn’t about red vs. blue but about the battle of two ancient secret societies, the Templars and the Assassins.

The story will still focus primarily on the conflict between these two groups. In next part of the scene that we saw, Connor learned that a British officer in a fort was also a Templar. He approached the stronghold by moving through the trees. He could have stayed hidden, but a demonstration of his combat skills was overdue. So he dropped down on top of a red coat and killed him with his hidden blade. Then he pulled out a tomahawk and sliced through a couple more soldiers. When only one trooper was left, Connor was in full hunting mode. The soldier ran away, and Connor killed him from behind.

Even though he made a lot of noise near the front gate, no one in the fort came out. So Connor slipped around to the back of the garrison. He then climbed through the rocks on a cliff face and came up over the back of the stronghold’s walls. He then identified his target and snuck up to him. Just to stir things up, Connor attacked a bunch of red coats again and brought every soldier in the fort down on him. He then assassinated his target and escaped.

The game will take you to the legendary battlefields of Lexington and Concord as well as the streets of Boston and New York (recreated on a one-to-three scale). You’ll also run into historical figures such as General George Washington, Benjamin Franklin, and Charles Lee. The game’s graphics are better in part because of Anvil Next, a new engine for creating the visuals and character animations in the game.

As for more clues, Hutchinson said, “If you know your history, you know that the American Revolution was not just fought on land.”