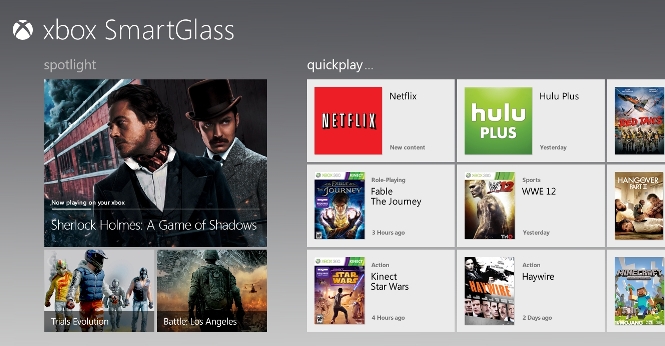 Microsoft sure loves its Game of Thrones. Every chance the software giant got to show off its new SmartGlass technology, it used the hit HBO fantasy series. It got to be rather difficult to cover for a journalist who’s only on episode three of the first season, trying to avoid spoilers.

But SmartGlass, a software-based application that extends Xbox 360 experiences onto smartphones and tablets, does shine best when paired with television or movie entertainment. That’s where programmers have fleshed out the most whiz-bang features at this time, but game designers have clever plans for this tech, too. Here are four general and specific uses for SmartGlass that are either in concept stage or ready for real products when it releases this fall.

Think of SmartGlass as your know-it-all TV- or movie-watching friend, only much quieter. It knows what you’re viewing on your Xbox 360 and will fill your phone or tablet with synopses, quotes, episode guides and timelines, and more, all accessible with a simple touch. It’s ultimately up to the content provider to decide what to include — in one Game of Thrones presentation, for example, Microsoft showed off the family trees of the different Houses, so you can learn more about the different characters in the show and how they’re tied to each other.

A lot of the data is interactive and can sync with where you specifically are in the program at any given time. During the opening credits of Game of Thrones in this demo, as the camera panned around the map of Weteros, SmartGlass simultaneously highlighted specific locations on the handheld screen, giving background information about the particular locale that was currently on the TV.

Even if you’re not interested in all the extra goodies about whatever you’re watching, at the very least, you can use your smartphone or tablet as a remote control to start, stop, pause, and so on. 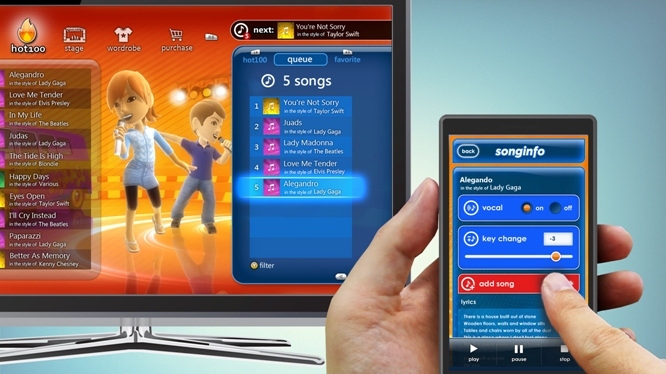 “One of the things that slows down a session of karaoke or Dance Central,” said Xbox 360 group product manager Peter Orullian, “is waiting for the new player to select the next song. SmartGlass eliminates that wait.” Since the app knows what you’re playing, it can give the next player a chance to pick the next tune in music-based games (pictured above). So if you’re on deck to show off your living-room moves in Dance Central 3, instead of standing up and replacing the last player, going through the menus to find the song that you want, then starting the session, you can just queue it up ahead of time and have it ready to go the instant it’s your turn. “It works just like a karaoke machine and takes out the downtime,” said Orullian.

At a press conference earlier today, Microsoft showed off a concept video where a Madden player could use a separate tablet screen to select plays and which receivers to throw the football to, keeping his plans and strategies away from the big screen, so his opponent can’t see them until they’re in motion.

In the game Home Run Stars, due out this fall for Xbox Live Arcade, one player can bat on a traditional controller and the television while the other does nuanced pitching on the smaller screen with some privacy. The reverse works as well: The batter can play on a phone while the pitcher uses the TV.

“I think the most exciting thing about SmartGlass,” said Robert Bowling, president of Robotoki and former creative strategist at Call of Duty maker Infinity Ward, “is that developers can use this extra screen to offer extra buttons and input options to players that the regular controller doesn’t have.”

“Those things are potential options,” said Jose Pinero, senior director of public relations for Xbox, of Bowling’s idea. “A good case of that would be using a swipe motion [on SmartGlass] for a move in a game. You already have all these buttons on the Xbox 360 controller, but maybe it would make sense for you to ‘pinch’ or open something in the game with your fingers through SmartGlass.” 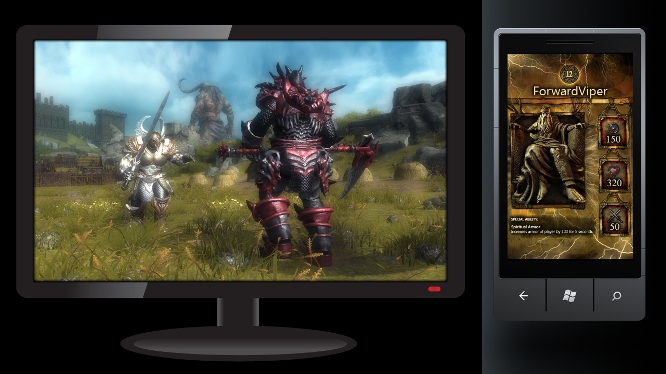 In the upcoming action game Ascend: New Gods, your SmartGlass screen can display boss-monster stats (pictured above) or a more complete minimap than what most games typically show in the corner of the television screen. That’s a simple, obvious application of a smaller secondary display, of course. But developers can also add much more data here if they choose to. In the press conference, Microsoft showed how players can access Halo Waypoint while playing the upcoming Halo 4. So while you’re shooting aliens on the big screen, you can check out game stats and canonical info on your phone.

A lot of the ideas coming out for SmartGlass aren’t revolutionary on their own — we’ve seen multiscreen connectivity in the past with Nintendo and Sony gaming machines (and both Microsoft competitors are also promoting this strategy heavily at the Electronic Entertainment Expo trade show going on right now in Los Angeles). But MS is looking at this technology as a persistent buddy that’s always ready by your side, an ever-changing app that adapts to your current entertainment choice.