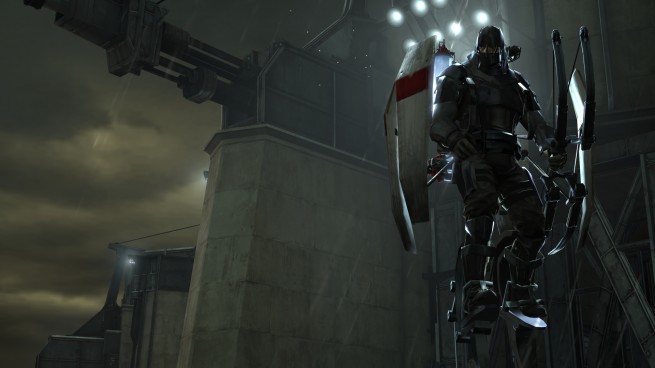 I’m certainly not the first to say that Dishonored is a blatant amalgamation of other games. Though publisher Bethesda Softworks (Rogue Warrior, The Elder Scrolls V: Skyrim) and developer Arkane Studios (Dark Messiah of Might & Magic, BioShock 2) have been deliberately avoiding the words “bio” and “shock” while referencing inspiration for their upcoming hybrid FPS, it’s still pretty easy to dissect Dishonored into its various individual ingredients. But being the “mother of all gaming cocktails,” as Atomic’s Nathan Lawrence puts it, is not necessarily a bad thing, especially when your product is derived from some of the more unique titles gaming has ever known.

1. Mirror’s Edge
Although there is plenty of running and jumping along rooftops in Dishonored, the Mirror’s Edge influence is most apparent in the above cinematic trailer. In the game itself, Corvo isn’t quite the fluid parkour veteran that Faith is, nor does he have to be thanks to his Blink ability, which allows him to instantly teleport short distances. Corvo can use Blink (and, with a little more precision, the Possession ability) to easily jump gaps, survive long falls, and reach locations that would be otherwise impossible to get to, even for Mirror’s Edge’s nimble heroine. Yet, he still manages freerunning just fine when his magical resources are depleted — which is almost never.

2. Thief
Sam Fischer and Solid Snake have kept the stealth genre alive and kicking long after Eidos’ Thief franchise went silent, but Dishonored’s first-person view and partially non-linear gameplay harkens back to Garrett’s glory days. Arkane insists that Dishonored can be played either full stealth or guns-blazing, but just like in Thief, the latter approach usually results in getting overwhelmed by large groups of enemies and a swift “game over” screen shortly thereafter.

If you want to continue down the path of least resistance (ie. not die), sticking to the shadows and rooftops is the way to go.

3. Hitman
Perhaps more than any other game on this list, the Hitman franchise has always provided copious methods for achieving a goal. Being that both Agent 47 and Corvo are assassins, their goals are almost always the same.

An example of the many ways you can dispatch a single target is best illustrated by a mission revolving around the Pendleton brothers. You can stealthily dispose of Pendleton and his prostitute, or you can possess your target, walk him out to the private balcony, then exit his body and push him over the edge with a blast of wind. More interestingly, though, is the ability to complete the game without killing a single person — in the case of Pendleton, Arkane said it’s possible to complete a series of side missions that will allow you to brainwash the man and send him to work in his own slave mines.

4. BioShock
Visually, the comparison between Dishonored and BioShock is an easy one: the first-person view, the dystopian steampunk setting, and even the stylized character design is reminiscent of 2K’s recent string of games such as BioShock 2, XCOM, and The Darkness II. But the familiarity is more than skin deep. The plague rat ability, where Corvus summons a sea of rabid furry piranhas to rapidly gnaw living targets down to the bone is reminiscent of the Insect Swarm Plasmid in BioShock 2. Corvo also uses a wind blast attack that is akin to the Sonic Boom Plasmid from BioShock.

Is Dishonored a shameless rip-off of BioShock just because it has some similar abilities? Of course not, but there’s more than a few aspects of Dishonored that make it impossible to play without feeling like you’re in a spin-off of some sort to 2K’s underwater classic.

5. Half-Life
Dishonored features an “original world envisioned by Half-Life 2 art director Viktor Antonov.” Arkane was also working directly with Valve on a Return to Ravenholme title set in the Half-Life universe that was eventually shelved, so it’s not a major leap to expect that some of those concepts and assets would make their way to Arkane’s next big title.

Perhaps the most striking similiarity, though, is Dishonored’s Tall Boys, bi-pedal guard units that appear to be a mish-mash of Half-Life’s Combine soldiers and synthetic Strider creatures. Really, it’s just a guy on mechanized stilts, but you can reflect their rockets back at them with Corvo’s wind gust ability, just like Gordon could do with his Gravity Gun in Half-Life 2.

Dishonored will be released for Xbox 360, PlayStation 3, and Windows PC on October 6, 2012. You can read about the pre-order bonuses here.