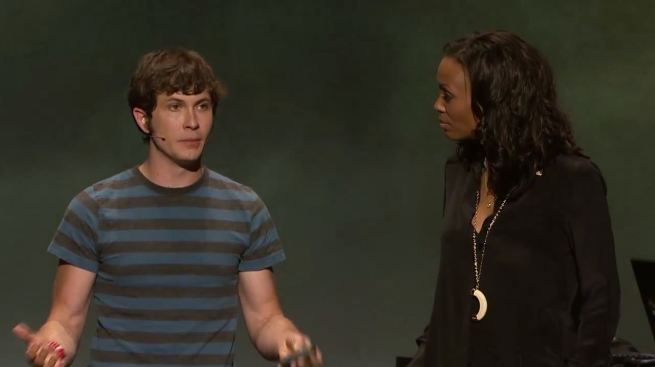 The press events at the Electronic Entertainment Expo trade show are always a mixed bag. For each mind-blowing announcement, we get several less impressive reveals. The presentations themselves are similarly all over the place; between celebrity hosts, “celebrity” hosts, and company executives who aren’t always the best at off-the-cuff banter, viewers might occasionally find the proceedings too painful to watch.

Here are the most cringe-inducing moments from this year’s E3 press briefings. I considered including the live demonstration for the Kinect castle-destruction game Wreckateer, but that’s not really fair because public Kinecting is always awkward regardless of which game the person is playing.

OK, imagine this: You’re planning to announce the latest entry in a mega-popular dancing game from the developers of Rock Band. You have a few options for how to do so, including showing gameplay footage, doing a live demo, or just sending someone out to talk about what’s new this time around. “Pshaw,” says Microsoft. “What if we pre-record Usher talking about his songs being in the game and then have him do a four-minute performance that has nothing much to do with anything?”

That’s not to say that Usher didn’t dance the hell out of that dance, but this moment was so jarring and non-game-related that I couldn’t help but shudder and look away until it stopped.

Ubisoft cuts straight to the cringing

Developer and publisher Ubisoft was not content to make its viewers wait over an hour for someone to break out into song; it opened with that. The Ubisoft presser began with a sorta-demonstration of Just Dance 4, its own pan-platform motion-control dance title. It started out demo-y enough, with a crew of dancers showing off some of the songs from the game. It was kind of awkward, sure, but watching people dance in public usually is. Discomfort was still within tolerable levels, however.

…and that’s when Flo Rida emerged with a Bedazzled microphone to perform “Good Feeling.” Sure, it’s in the game and therefore kind of relevant, but we were all still recovering from that Usher thing.

Don’t accuse Ubisoft of not caring; it gives every kind of f*ck

Unfortunately, we’re not done with Ubisoft yet. Once the presentation proper began we got right on to the games, starting with developer Ubisoft Montreal’s upcoming open-world adventure Far Cry 3.

(This video is not safe for work, which is more warning than Ubisoft gave those of us watching from work.)

“Hello,” said the Far Cry 3 demo. “Here is some point-of-view footage of a topless woman gyrating.” Once it got past that, the trailer proceeded to drop more F-bombs than Quentin Tarantino. Not just spoken, either: They were also on television screens and even hidden in the studio credits, as one poster on NeoGaf discovered (that link is also NSFW).

Sony gets its nose stuck in a (Wonder)book

Every E3 has one presentation that goes on for far too long. This year, it was the one for Wonderbook, Sony’s augmented-reality suite for the PlayStation Move. It’s a cool enough idea, especially with the backing from Harry Potter scribe J.K. Rowling, but the live demonstration failed to capture the audience’s imagination. That might be because it was a live demonstration, and sometimes machines refuse to co-operate when they know a lot of people are watching.

It’s not just that the Wonderbook demo was kind of dry and hollow, but motion controls, more so than regular ones, have a higher burden placed upon them to work perfectly all the time. Every motion-control demonstration is one hiccup away from being just some poor person flailing uselessly on a stage.

Some of the most awkward moments in E3 pressers come from studio heads and company executives’ barely canned banter. I don’t really fault them for this; they’re not entertainers, and they don’t always know how to read a crowd or improvise jokes.

Scott Moffitt, Nintendo of America’s executive vice president of sales and marketing, took to the stage at Nintendo’s press event to showcase some of the upcoming titles for the 3DS handheld system. Before yielding the floor to Moffitt, NoA president Reggie Fils-Aime told him that they’d “carved out a few moments” for him. Moffitt, apparently seeing an opportunity to win points with the crowd, swung and missed.

“A couple of minutes?” Moffitt asked plaintively. “Where’s the love?”

I’m guessing he was expecting a better response than the one he got, which is too bad because it was a pretty fair question. This example is not awkward because Moffitt said or did anything wrong; it’s awkward because his faith in that line makes his expression of disappointment and the need to get back on script more obvious and painful to watch. When I cringe at this, I assure you that it is the most sympathetic cringe possible.

I’m going to return to Ubisoft to close because that briefing had the highest concentration of uncomfortable pauses since that unfortunate Activision briefing back at E3 2007. Most of these came from the co-host, Toby “Tobuscus” Turner, who is best known for his humor videos on YouTube.

Unfortunately for Turner, YouTube prowess does not always translate to being the co-host of a multimillion-dollar live event, and pretty much every word out of his mouth made me wince. Host Aisha Tyler only added to the awkwardness by making it pretty clear that she was just as annoyed as we were — unless, of course, the event coordinators had merely devised the least effective hosting dynamic in history.

I’ll spare you the video on this one, but here are some examples of Turner’s spontaneous comedic stylings.

After the ZombiU reveal trailer, which includes a decapitation via bayonet: “He just cut off a head with a gun sword!”

Coming out on stage: “I dropped my mic!”

???: “I came out of the womb with an Xbox controller [. . .] It was strange because it hadn’t been invented. I must have invented it while I was in there.”