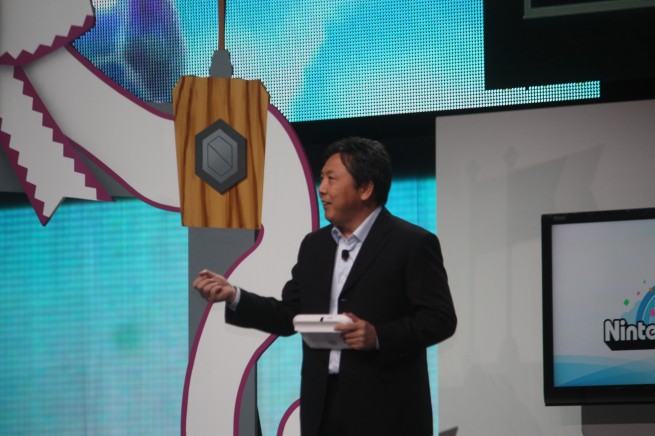 Nintendo revealed Nintendo Land during its Electronic Entertainment Expo (E3) press conference. Twelve iconic Nintendo properties are transformed into theme park attractions and players can compete against each other using their Miis.

Nintendo Land is a multiplayer-focused project designed to take advantage of the Wii U game pad and a new gameplay mechanic called asymmetrical gameplay. The Wii U supports five players at a time, with four playing on the television screen and the fifth using the tablet-like controller. Asymmetrical gameplay pits the game pad user against everyone else.

Players using the Wii U game pad take on a special role. They’re playing the same game, but see a different perspective of the world. During the presentation, Nintendo showed how Luigi’s Ghost Mansion (one of the 12 attractions in Nintendo Land) works to explain asymmetrical gameplay:

Four players using standard controllers are exploring a haunted mansion, equipped with flashlights. The fifth player, using the game pad, controls the ghost. Unlike the other characters, the ghost player can view the entire map. The goal for each player is to use the flashlight to fight the ghost without getting knocked out.

Flashlights not only harm the ghost but help revive fallen players.

This builds off of the Chase Mii demo Nintendo showed at E3 last year where four players chased Mario through a maze. In that demo, the Mario player could see the entire course and get on-screen notifications on the game pad whenever another character was getting too close.

Nintendo Land will have 12 different attractions, some of which will be single player.

Nintendo Land will launch alongside the Wii U this holiday season. Nintendo did not confirm if it was a pack-in title like Wii Sports, but that seems likely.