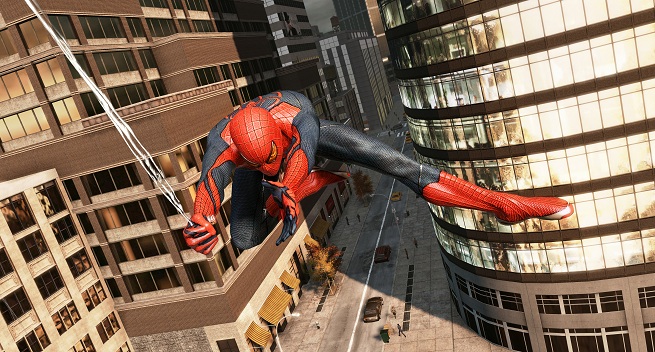 In the upcoming The Amazing Spider-Man video game, our hero apparently relies on his mobile phone’s global-positioning satellite feature to navigate Manhattan, New York. He has, after all, spent his last two video games away from The Empire State. In fact, Spider-Man was in different time periods and dimensions, so perhaps it makes sense that he would need a little help familiarizing himself with the current incarnation of New York City.

In an effort to keep the game’s heads-up display (HUD) minimal and context appropriate, developer Beenox chose to represent the onscreen minimap as a fake cell-phone app. I got to take the Xbox 360 version of The Amazing Spider-Man for a swing at a recent event in Culver City, Calif. and found this feature to be a good compliment to some of the game’s other mechanics. I also found it to be little silly in concept…. 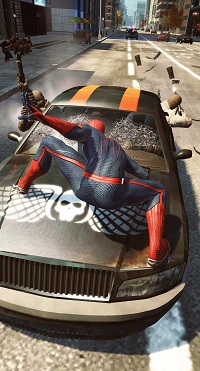 Players can use the map on the Wall-crawler’s phone to locate missions to complete and crimes to fight in the big city. At one point, I used it to track down a car full of robbery suspects and then proceeded to spray my webbing all over the thugs’ windshield to force them to crash.

After that, I relied on the GPS map to follow a rampaging, flying robot called a Hunter. It zoomed around a couple of buildings several times to try and escape. By simply referring to the menacing machine’s blip on the GPS, however, I was able to keep up my pursuit and eventually take it out using the Web Rush move.

This maneuver is a mix of Max Payne’s Bullet Time, a slow-down feature, and Sonic the Hedgehog’s Homing Attack. By using Web Rush, the player can assess in slow motion the different objects in the immediate environment that he can interact with. Selecting a target sends the Web-slinger flying towards it to kick its ass, to grab the collectible comic-book page, or to do whatever else based on the situational context. Naturally, all of this quick zigging and zagging among the numerous tall buildings left me a little disoriented, so Spidey’s mobile-phone map helped me regain my boundaries.

I also found myself turned around a lot due to Spider-Man’s web swinging. This parabolic movement is obviously how our hero navigates the city, but from a gameplay perspective in a modern sandbox title, it just felt laborious. Perhaps to quickly get around Manhattan — considering the supposed traffic on the streets — this really is one of the most efficient methods. It does, however, create a slight conflict in logic: How the hell does Spider-Man constantly reference the GPS map on his mobile device when both of his hands are caught up shooting out webs to swing on?

Most people have difficulty driving and texting. I can’t imagine what it’s like to fight flying killing machines, swing around town, and check your phone all at the same time. I realize that this is just a game and that the minimap is necessary to help players get around. Plus, giving the HUD a modern context like this is a novel and clever concept. I just find the theoretical implementation of it all to be a bit silly.

From the game footage I’ve seen, our hero also uses his phone to talk to love-interest Gwen Stacy and progress the story. I’m curious, however, to see what other functions players will be able to use. Perhaps they can have Spidey post some breathtaking Instagram photos from hundreds of feet above the city…with the vintage filter turned on, of course. 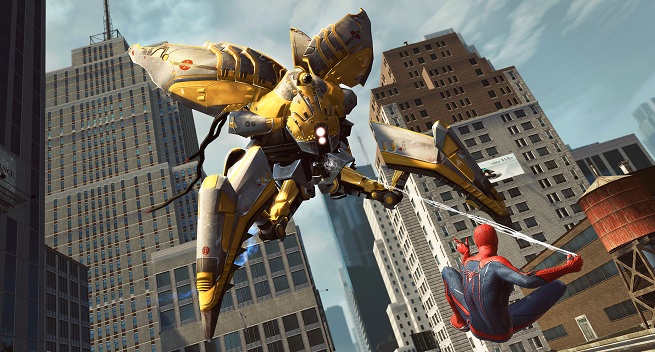