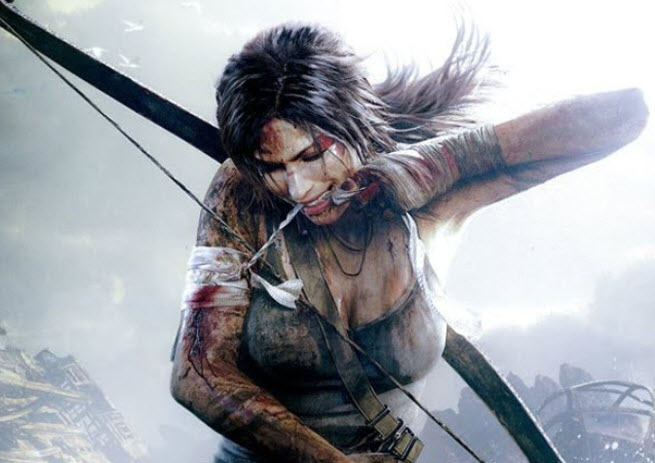 Lara Croft was one of the most iconic video game characters of the past 15 years. But we never really learned how she came to be. In Crystal Dynamics’ remake of Tomb Raider coming in 2013, we’re going to find out. And the tale looks like it is going to be enthralling.

The Lara Croft of this game, we know from last year’s initial revelation, will be a 21-year-old young woman who looks far more innocent and vulnerable than Angelina Jolie, who played Lara Croft in two Tomb Raider movies, ever did as the gun-toting adventurer. She is trusting, but not completely naive. She believes in people and isn’t cynical. But she loves animals, but has to know when to kill them for the sake of her own survival. Somewhere along the way, she changed. And the new Tomb Raider aims to capture those moments. We know this because we saw a full level of the game at a preview event and saw young Lara transform before our very eyes.

The reboot of Tomb Raider by the division of Japan’s Square Enix is perhaps the most important project in this generation of video games. More than 35 million Tomb Raider games have been sold, generating revenues that are likely well above $1 billion. If the developers pull this off their risky project, Lara Croft could live on for generations of fans to come. If they don’t, she could be forgotten altogether.

“As a kid growing up, I thought thee was something really important about origin stories,” said Karl Stewart, global brand manager for Tomb Raider at Crystal Dynamics, speaking to a group of journalists recently. “How did Peter Park become Spider-Man. You get the same feeling for Lara Croft in this game.”

The effort being put into this game shows in its beautiful graphics. Lara is literally so realistic and beautiful that — I’m certain of this — a lot of video gamers are going to fall in love with her. She isn’t as buxom as she used to be, and she has scars on her body, tears in her eyes, dirt on her clothing and dried blood on her midriff.

A year ago, we saw a demo of the video game. Lara was just out of college and was aboard the ship Endurance off the coast of Japan. A storm hit, her ship sank, and she had to claw her way back to the shore after nearly drowning. She wakes in a cave, hanging upside down and tied in mummy fashion. She had to escape by swinging back and forth and setting her threads on fire. She showed resourcefulness at getting out of life-threatening pickles as if she were playing a game of chess. She talks to herself, conveying emotions you don’t normally feel in a shooter game.

As we observed a year ago, the thing that’s attractive about this approach to Lara Croft is that she doubts herself, but finds that she has an instinct for survival that can be trusted and improved with each new challenge. When she killed her first wolf, she lamented, “It was me or you.” Now, in the new demo, she barely bats an eye as she launches an arrow into a charging wolf.

Lara escaped from her captor in the early level. In this new demo, she searches for her shipwrecked mates. As described by Noah Hughes, creative director at Crystal Dynamics, Lara goes through a massive change in character as she is forced to deal with the harsh conditions on the island, which include nearly freezing to death.

The opening scene of the demo was a a visual feast. Lara looks over a cliff into an ocean with sun spots on the water and a rainbow in the distance. She has to cross a tree that has fallen across the cliff in front of a waterfall. “You can do this,” Lara says to herself as she tiptoes on the log over the abyss. She has to climb up a crashed World War II bomber hanging on the cliff. She jumps to the other side and is nearly decapitated by a falling wing. She shrieks.

She holds the wound in her side and moves on. Then she comes across an abandoned lifeboat. She finds a camp with some supplies, including a walkie-talkie. She falls screaming into a ravine and manages to escape without anymore visible injuries. That’s when you begin to wonder if she really is a video game superhero. Then the developers pull you back into her vulnerable side. Frost comes out of her mouth and she sits shivering at the fire, lighting her last match to start a life-sustaining campfire.

In the morning, she walks on. She recoils as she sees a body hanging from a tree, and then her mind switches to the practical. “I can use that bow,” she says. She finds a way to pull the bow off the corpse, but winds up falling to the ground, striking her head on the ground in what would be a coma-inducing injury for a normal person. With the bow, she slays a deer and apologizes to it. She returns to the base camp to cook the meat.

At the camp, you see a slick user interface that you can use to inspect Lara’s inventory, her achievements and other video-game-related stats. Once you leave the base camp, that game interface disappears and you return to a realistic view of Lara. Now armed and fed, Lara begins exploring. She goes into a mine and looks at the carvings by indigenous island dwellers. She has to solve practical problems like opening locks and finding tools such as picks.

Then she encounters her first humans, a friend named Sam and a shifty character with a crutch. She recognizes him as a murderer and tries to warn her friend. But he pulls a knife and takes the friend away. Lara tries to pursue and shoots the bow, but then her foot gets caught in a bear trap. More survivors find her, they free Lara, and then the split up to find Sam and other survivors. Lara draws the short straw as she is paired with a mealy-mouthed professor who has a gun. The professor spouts about Japanese tribal culture and the “lost fleet” as they wander. They find an obstacle that they can only overcome if Lara finds pieces to an ax and upgrades her tool so that it is strong enough to be used as a lever.

They get through the doorway and run right into a group of pirate-like thugs. The professor is a coward and he gives up his gun, but Lara tries to fight. The thugs capture her. She is thrown in with other captured colleagues. One tries to flee and he is shot. The others run, and one knife-wielding thug tells the handcuffed Lara to stay put. She ignores the threat and creeps stealthily past the other thugs as they search for escapees.

She evades most of them, but then has to deal with one last enemy. He walks by her in an abandoned hut. Then he returns and points a gun at her head. He closes in with her and she breathes uneasily. He tries to feel up her body and she tries to deflect him. He has rape on his mind. She takes a chance and attacks. He tries to strangle her. At this point, you control Lara and you have to work the controls quick, or Lara dies a horrible death with her face blown off. She grabs his gun and shoots him in the balls twice. He dies a slow, gurgling death. Lara cries. With blood spattered on her face, she turns to face the camera (or, rather, looks straight at you, the gamer) and shows her hardened, determined face.

And that is how Lara Croft grows up.

Check out our video interview with Karl Stewart below.

And here is the Crossroads trailer.
[youtube=http://www.youtube.com/watch?v=ol_-QGlwRqc]