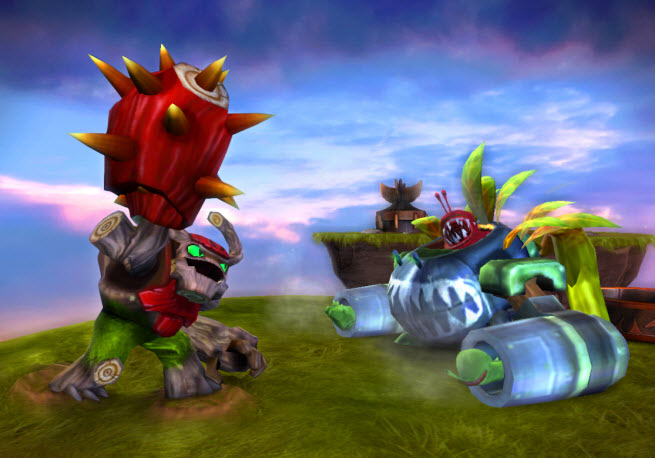 Activision Blizzard has an evil plan afoot to rule both toys and video games. And Skylanders Giants is going to be a big part of that.

At the Electronic Entertainment Expo (E3) show in Los Angeles this week, the company is showing off the sequel to last year’s big hit, Skylanders: Spyro’s Adventure, a video game with real-world collectible toys. Those toys sold more than 30 million units and were still flying off shelves in the first quarter, when they outsold Star Wars toys. Skylanders was a top-ten seller in North America and generated the greatest single-year sales of any new children’s entertainment property.

With Skylanders Giants, Activision Publishing, a division of Activision Blizzard, and developer Toys For Bob hope to repeat that success with giant-sized characters.

Activision Blizzard made a massive bet on Skylanders, a new entertainment property that creatively combined technology innovation, toys, and video, games. The toys have electronic memory components and wireless connectivity built in, so when you put a Skylander toy on a “Portal of Power” peripheral connected to a game console, you magically transport the character into the game. When you take the character off the portal, the leveled up stats are stored in the toy. That enables a child to take a toy to play at a friend’s house. 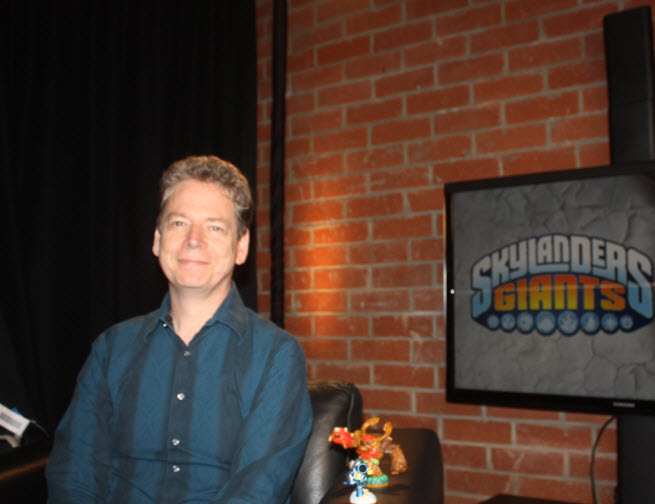 Skylanders Giants will mark the evolution of this core concept, Eric Hirshberg, chief executive of Activision Publishing, said at a recent gathering of game journalists.

“We know we have to keep the energy going,” Hirshberg said.

Giants will feature eight new collectible figurines that will be twice the size of the original Skylanders, both physically and virtually. They will include a light technology that allows them to light up when on the Portal of Power.

This fall, the company will launch a story-driven adventure game across all major platforms: console, handheld, mobile, and PC online. The Giants version of the game will be compatible with older toys and the leveled-up stats.

Paul Reiche (pictured above), founder of Toys For Bob in Novato, Calif., said in an interview with GamesBeat that the company is continuing to invest heavily in technology, games, and toys. While Activision has pared back on the number of game properties it supports, it made sense to go all the way with the good ideas coming out of Toys For Bob, Hirshberg said.

Reiche and Fred Ford started Toys For Bob in 1989 and built a number of video games. Activision bought the company in 2005 and gave it responsibility for developing the Spyro game franchise. More than 100 people are working on the franchise, and more developers from other Activision studios are helping out with different versions of the property. The characters are designed for personality, humor, and charm.

The new game features eight additional normal-size characters such as Jet-Vac, part of the element of air. Jet-Vac uses a vacuum gun to send blasts of air at enemies. Sometimes you need Giant characters to break into a certain part of the game world so that you can collect more loot. The new Skylanders characters can be leveled up to 15, while last year’s peaked at 12. The original 32 Skylanders are being re-released in different poses.

You can go into battle mode and play against a friend to see who is the best “portal master. As it was in the beginning, the whole idea is about bringing your toys to life.

The idea of melding toys and video games isn’t new. Toy companies created titles such as U.B. Funkeys that also came with toys. But doing a good job with a very ambitious game is rare. And tying together the products in the way that Activision Blizzard has done is unprecedented. You can bet that there will be more rivals this year.

In the past, rival Smith & Tinker’s Nanovor hybrid toy-games have crashed and burned. Nukotoys is still aiming to do something similar in the toy-game hybrid market. And Disney Mobile has just launched toys that can be used with a Cars-themed iPad game. The whole idea of hybrid toys is gathering more steam.

Toys For Bob put a lot of work into the original.  They explored how to create toys that could be used directly in games. One of the team’s developers, Robert Leyland, experimented with wireless technology and found something that would work fast. So when you set a toy on an electronic “portal,” the data stored in the toy’s flash memory could be instantly transferred wirelessly into the console and then into the game world.

Meanwhile, a senior artist at the company, I-Wei Huang, began the work on the toys. Instead of creating them as 3D animations first, Huang sculpted the characters as physical objects. Once they had these elements together, they started building the game. They recruited Toy Story film writers Joel Cohen and Alec Sokolow to craft an adventure story for the game. They decided to target the Wii at first.

Dave Stohl, the Activision executive in charge of development, told them to take the bigger bet and go with the toys. As the idea moved up the executive chain, it became bigger and bigger.

A couple of years ago, the project stood at a critical decision point. Activision Blizzard chief executive Bobby Kotick had to weigh the options for launching the game as it was originally scheduled or pushing it back. He decided to postpone the project by a year, adding a huge amount to the overall budget. That paid off when the game debuted in October and, helped by the toys, became a big hit.

Check out our gallery of screen shots below and our video interview with Reiche.