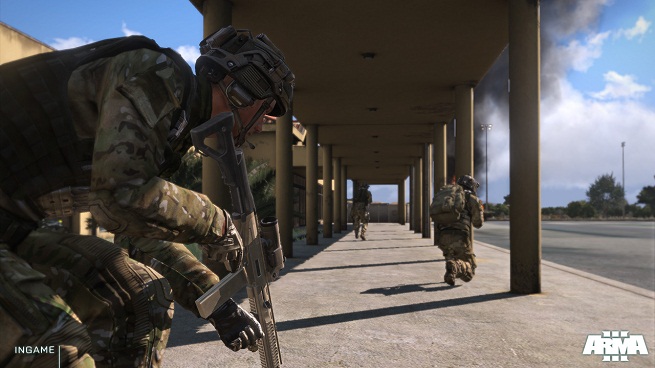 Science says that life crept forth from the sea. Developer/publisher Bohemia Interactive seeks a return to our watery womb on waves of bullet casings and war-machine exhaust.

After sampling each proffered demo, I noticed my notes and scribblings for both games seemed eerily similar. Check out three observations below.

Both carry the ocean’s salty tang. Arma III’s flashpoints occur upon the Grecian islands of Limnos and Stratis. Carrier Command conducts its operations among an archipelago of 33 islands. The ever-present ocean encompasses and wraps its briny fingers around these spits of land, and players find themselves submerged before they know it.

During the Arma III demo, I glimpsed Bohemia’s artistic hand at forging lush, believable underwater environments — a first for the series — and, of course, deadly, deadly sea mines. Armed with a scuba tank, a submarine scooter, and a water-friendly submachine gun, I’m tasked with clearing those mines as part of an infiltration mission. Powered by the latest version of Bohemia’s Real Virtuality engine, the swelling and ebbing surface formed a mirrored roof above my head. Mighty rock formations loomed before my scooter, and I spent minutes soaring beneath natural archways and ledges like a militarized Cousteau.

Creative director Jay Crowe says a “whole other series of challenges” reared its fanged maw when figuring out an equally representative underwater scenario as Arma’s land-based conflicts, but the short time I spent under the waves convinced me Bohemia surpassed those challenges handily. 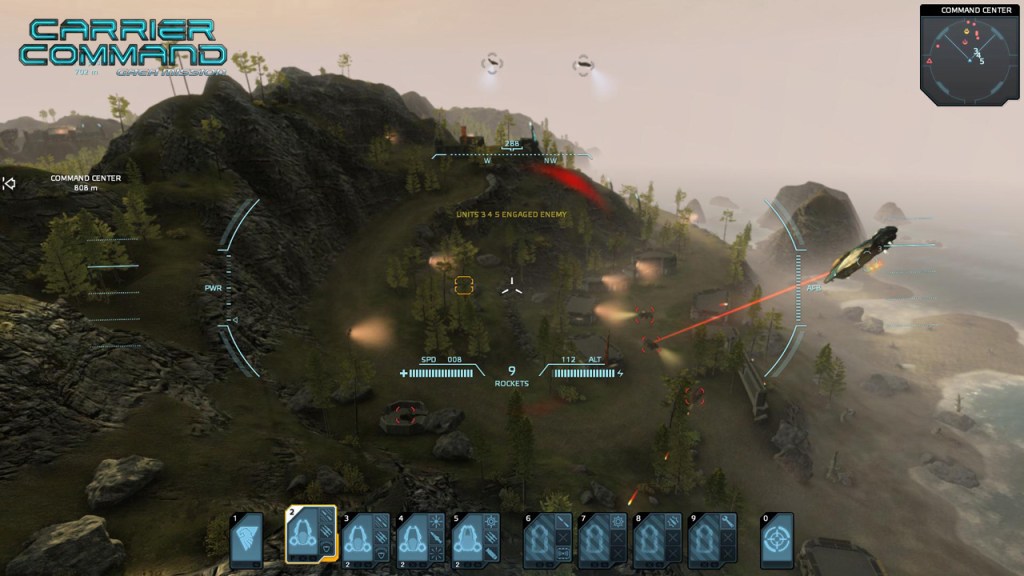 Carrier Command’s lifeblood is the sea. At the onset of a match, your charge involves a single, massive carrier brimming with turrets and unit docks. The goal? Stake as much dirt as possible while fending off the opposition’s carrier and units in furious island scrums.

As a measure of balance and pacing, unit construction occurs upon a designated “stockpile” island chosen by the player. Deciding the stockpile’s location balances risk with rapid results as players can swap an island among four roles — factory, defense, mining, and stockpile — on the fly. Acquiring freshly built units entails either sailing the mothership itself for a pickup or ordering a cargo convoy for delivery. Either way, the sea’s ubiquity factors heavily in unit upkeep during battles.

Both pack first-person shooter action. The Arma series’ calling lies in realistic infantry engagements, a bread-and-butter staple appearing full force in the third entry. In an earlier section of the playthrough, I took part in a morning raid on an abandoned village. My A.I. squadmates did most of the gruntwork, sweeping enemy soldiers off the streets with marksman shots and covering fire from fences and doorways. Weapon noises crackled with satisfying intensity, and bullets pierced flesh with equally satisfying lethality — buying the farm only takes a few hits to the torso.

Senior designer Martin Melicharek claimed the campaign’s structure exists as a necessary step for players to understand how and why they receive the reins of a gargantuan carrier, but the simple gameplay I saw didn’t spark any interest to find out more story-wise.

Both involve a war over precious resources. Set in the 2030s, Arma III charts the efforts of NATO holding off Europe’s “Eastern armies” invading Greece. No further details on the backstory appeared during my time with Bohemia, but the game’s near-future date suggests a rush for strategically viable land and dwindling natural fuel.

Carrier Command slims things down by narrowing unit costs to one resource type called…well, resources. The two purchaseable units, the Walrus amphibious tank and Manta jet, cost next to nothing and for good reason: You’ll need generous amounts of both for victory on the islands. Of course, resources also unlock increasingly powerful weapons, armor, and item upgrades, such as shields. Pool enough dough, and you’ll nab the powerful Hammerhead nuke — just don’t hinge on it flattening anything else beyond an entire base.