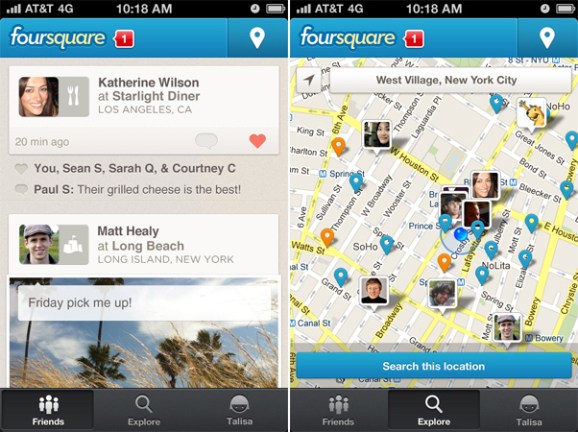 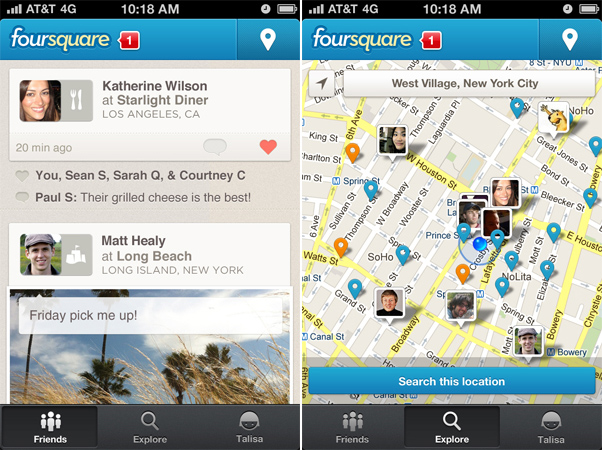 Location-based social network Foursquare has redesigned its popular iPhone and Android applications with new focus on simplicity and encouraging more interactions between users with likes and mentions, the company announced today.

Foursquare has attracted 20 million users to its service to date, but that certainly pales next to Facebook’s 900 million or even Instagram’s 50 million. It’s not playing in the same spaces as those, but it certainly loves to bring that user count up. So with a new redesign, it is simplifying its interface and pushing for more social interactions between users. Both of those factors could make the service more addictive and not just something people casually use.

Alex Rainert, Foursquare’s head of product, told VentureBeat that the company decided five to six months ago that it wanted to redesign its experience from the ground up. “We decided to pull the pieces apart and put them back together again,” Rainert said. “We want to create the richest experience possible.”

Rainert walked me through the redesign to give me a better feel for it. The first major thing you’ll notice in the app redesign is that the bottom navigation bar has been slimmed to three tabs from five. Now at the bottom you have Friends, Explore, and Me tabs. The Check-In tab (probably the tab I tap the most in the app) has been replaced with the check-in button in the top right-hand corner that is present no matter which tab you are browsing.

On the Friends tab, you’ll finally be able to “like” someone’s check-in or mention a friend in your check-in post. When you check-in to a place, for example, you can now mention your friend Katie and tell her thanks for recommending a place (or even tell her to hurry up when she’s running late). There are also much larger photos that go with check-ins.

The Explore tab pops up with a new map and a personalized list of interesting places around you based on your friends’ and your check-in data. Not only does it show nearby places that you should check out or that have specials, it will also show you where your friends are currently checked in. You can now “heart” or “broken heart” (like or unlike) venues too.

“We introduced the Explore tab at South-by-Southwest 2011 and now we’re really seeing it come to fruition,” Rainert said.

The tab featuring your profile has been revamped as well with some slick polish. You can see tabs for your friends, stats, photos you’ve taken, tips you’ve left, badges you’ve earned, and lists you’ve created.

The new iPhone and Android apps will be live shortly in their respective app stores. A new BlackBerry update will be available in the next few weeks.

New York City-based Foursquare has raised about $71 million in funding so far from the likes of Andreessen-Horowitz, O’Reilly AlphaTech Ventures, Union Square Ventures, and Spark Capital. Foursquare last landed a massive $50 million round last June with a valuation of $600 million.

Check out the full gallery below to get a better look at the redesign: