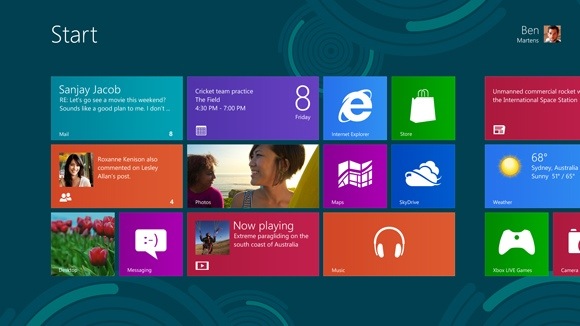 GamesBeat met with project director Christopher Flores at the Electronic Entertainment Expo (E3) in Los Angeles, Calif. to discuss the upcoming gaming features built into Windows 8. Demonstrating on a Windows 8-powered tablet, Flores walked us through the many features designed to make our lives as gamers just that much more fun.

The tablet itself was a topic of much of the demo. Flores pointed out gaming features on the Windows 8 interface, which is optimized to respond to touch input as well as mouse and keyboard. Live tiles in the Metro style interface, which looks just like the Xbox 360 dashboard and the Windows 7 Phone interface, show animation and information pulled from the cloud, such as gamertags and the like. Photos collect in one app that gathers user images from SkyDrive (Microsoft’s cloud service), Facebook, Flickr, and the local hard drive into one central location.

Windows 8 utilizes multitasking to good effect as well. We saw a Unity tech demo running in one pane on the tablet. With a simple tap-and-hold on the left side of the screen, Flores brought up a website in a smaller pane on that side. This could be helpful when consulting a walkthrough, for instance.

Unity itself is adding support for Windows 8, bringing it’s popular game creation toolset to the new operating system. Flores mentioned Unity’s versatility, which uses Direct X at its core. He said that Unity games fully support touch-based, mobile games as well. “Windows 8 is able to serve both hardcore and casual gamers,” he continued, “with the power you’ve come to expect from a PC.” The Unity engine will support specific Windows 8 features and functionality including touch, accelerometer, magnetometer, gyroscope, charms bar, and Live tiles. Game studios have used Unity to make many popular titles both released and under development, including Wasteland 2, Shadowgun, Battlestar Galactica Online, MechWarrior Tactics.

Windows 8 will also offer backward compatibility for older Windows games, ensuring that gamers won’t lose access to the games they have purchased previously.

Microsoft plans to give developers the industry standard 70 percent split for games in the Windows 8 Store, but the company plans to upgrade titles that make over a certain amount to an 80 percent split — an app marketplace first.

When pressed for a release timeline, Flores demurred, pointing us to a recent blog on the Microsoft website: “Ultimately, our partners will determine when their PCs are available in market. If the feedback and telemetry on Windows 8 and Windows RT match our expectations, then we will enter the final phases of the RTM process in about two months. If we are successful in that, then we are tracking to our shared goal of having PCs with Windows 8 and Windows RT available for the holidays.”