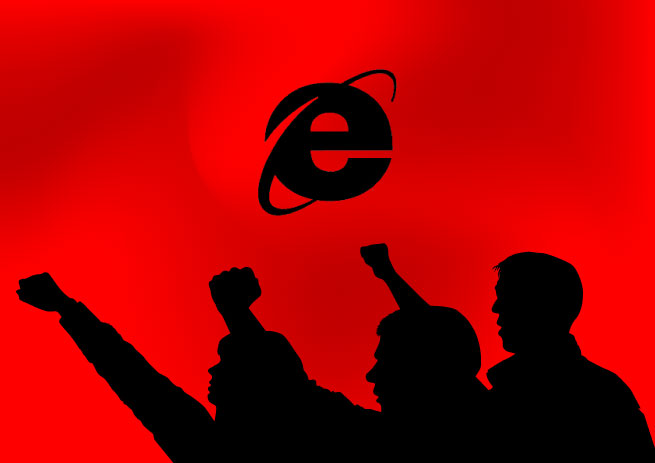 Microsoft is certainly doing a good job of painting itself as a consumer advocate in regards to the new “Do Not Track” browser option, but its unyielding stance might be doing more harm than good.

The DNT feature allows people to stop websites from having their personal information tracked and collected for ad targeting/marketing purposes. Not only has Microsoft come out in support of DNT, but it’s also making it the default option for people using its Internet Explorer 10 browser, as VentureBeat previously reported.

The move didn’t exactly sit well with advertising industry groups, because it will likely translate into less effective advertising and lower revenue. And let’s be honest, the majority of people won’t go out of their way to let advertisers track and catalog their personal data.

Now, a handful of highly influential privacy advocates — including Electronic Frontier Foundation’s Peter Eckersley, Mozilla’s Tom Lowenthal, and Stanford University professor Jonathan Mayer — are voicing disagreement with Microsoft’s decision over the DNT default setting. The privacy advocates are charged with overseeing a “Do Not Track Compromise” (PDF) proposal for the W3C, the organization charged with issuing official web standards. Yesterday, that proposal, which is endorsed by the FTC, was updated to reflect the sentiments of the advertising community.

While noting that the changes haven’t been reviewed by committee, the group did explain the proposal’s update in a conference call, saying:

Today we reaffirmed the group consensus that a user agent MUST NOT set a default of DNT:1 or DNT:0, unless the act of selecting that user agent is itself a choice that expresses the user’s preference for privacy. In all cases, a DNT signal MUST be an expression of a user’s preference.

Microsoft IE, as a general purpose user agent, will not be able to claim compliance with DNT once we have a published W3C Recommendation. As a practical matter they can continue their current default settings, since DNT is a voluntary standard in the first place. But if they claim to comply with the W3C Recommendation and do not, that is a matter the FTC (and others) can enforce.

Avoiding Do Not Track legislation

The ad industry’s compliance with DNT standards is basically to avoid having the Federal Trade Commission call for legislation regarding online data tracking. If you’ve paid attention to U.S. legislators’ attempts to pass laws for the web, you’ll understand they aren’t very good at it. (If you’d like proof, check out our coverage of SOPA, PIPA, and CISPA.) The best-case scenario for online privacy tracking regulation would be for everyone (advertisers, websites, and browsers) to work together on a comprehensive set of standards that are fair, logical, and able to evolve with behavior and technology trends, without bringing Congress into the mix.

If other browsers (or “user agents”) start following Microsoft’s lead with a default DNT option, it could jeopardize the ad industry’s willingness to work towards online tracking standards that aren’t mandated by a new law. In other words, it could slow the “Do Not Track” movement to a crawl.

Microsoft, however, is staying firm on its decision to keep DNT as a default. And for that, it gains some approval from tech-savvy web users who don’t want to be tracked, and probably also improves its standing next to ad-revenue-dependent rival Google.

“We are engaged with the W3C, as we are with many international standards bodies. While we respect the W3C’s perspective, we believe that a standard should support a privacy by default choice for consumers,” Microsoft Chief Privacy Officer Brendon Lynch said in a statement to VentureBeat.

The biggest disadvantage of Microsoft’s stance on DNT is that Internet Explorer, which accounts for about a fifth of all browser usage, will no longer be able to claim compliance with W3C standards. That means, theoretically, advertisers can simply ignore IE10’s attempt to stop data from being tracked. That could lead to Microsoft or its users employing more powerful DNT methods.

Many people criticize popular ways to stop advertisers and others from tracking your web activity, such as those used by NoScript and AdBlock Plus. But without a universal standard, these tools are pretty much your only option today.

At the same time, Microsoft’s decision might not have a big enough impact to matter, according to StrangeLoop president Joshua Bixby, whose firm helps companies understand browser usage trends to boost revenue. In fact, there might even be an incentive for companies to allow IE10 to work as intended.

But the number of people who will upgrade to IE10 (the only version of the web browser that will feature the default DNT option) probably won’t be large enough to seriously hurt revenue, he said. This is also true because, for the DNT functionality to work, websites need to comply with a set of standards. It’s a voluntary effort at this point, so there’s no telling when a large number of big websites will jump on board.

Bixby added that IE10 users who can’t be tracked will provide companies, as well as the analytics firms they work with, “enough time to adapt technologies to create new and more open standards for how to track people.”

Essentially, the absence of user data from IE10 users can serve as a test case for new methods of ad/data tracking. When those methods prove successful, they can be pushed out to other consumers without fear of flying blind. In this sense, Microsoft is unwittingly helping the DNT movement, but that could quickly change if others start offering a default setting to stop advertisers from tracking data.

“Using the Facebook IPO as a watermark, this is the beginning of the ad business needing to change on the Internet,” Bixby said.