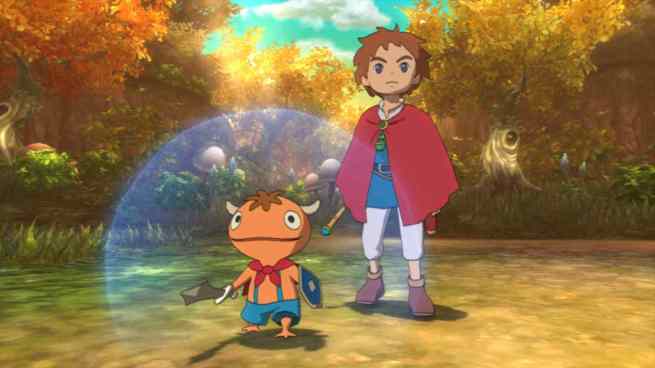 I’ve seen many games call themselves interactive movies or cartoons, but Ni No Kuni: Wrath of the White Witch actually looks — and plays — the part. The title itself boasts gorgeous character design and cutscenes from Studio Ghibli, one of the world’s most beloved and acclaimed animation houses.

As I played through the game at Namco’s booth during the 2012 Electronic Entertainment Expo (E3), I couldn’t help but marvel at the stunning visuals and fluid animation on display. The characters moved with effortless grace, running through lush, vivid environments. Each battle featured densely colored and lovingly crafted creatures.

You play as a boy named Oliver who is looking to bring back his deceased mother by traveling to a faraway world. The role-playing game features mainstays from the genre, including selectable party members, robust battles, and towns to visit — replete with non-playable characters to speak with. The combat employs a modified take on the traditional turn-based system seen in many Japanese role-playing games. Players are able to position themselves in real time, however, adding an extra layer to fighting.

Wrath of the White Witch also features unique “familiars,” cute allies who fight by your side. One resembled a small anteater with a lantern hanging from his nose. Another wielded a tiny sword and shield while equally small horns adorned his head. Studio Ghibli’s character design truly shines here, as the familiars I saw all had that signature bright and cheerful art style.

If you want to immerse yourself in a living, breathing virtual anime, be sure to check out Ni No Kuni: Wrath of the White Witch when it comes out on January 22, 2013.