Brand-new Thunderclap refers to itself as a “crowdspeaking platform,” and riffs on the crowdfunding model to help tweeters make noise and reverberate their messages with force around the information network. 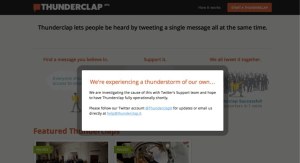 So what’s the big deal? Automated tweets en masse are a big no-no in Twitter land.

Using the service, a single Twitter user creates a Thunderclap, a tweet the person wants to broadcast to the masses, and sets a goal to attract a set number of followers by a certain date. Each of the supporting followers authorize Thunderclap to tweet on their behalf, so should the tweet campaign surpass the threshold by the time set, an onslaught of identical tweets are pushed out into the Twittersphere simultaneously.

Just yesterday, the first Thunderclap tipped and was tweeted by nearly 2,000 people who pledged to support a political mission championed by Rolling Stone writer Matt Taibi.

It seems that Thunderclap has the potential to pack a powerful punch for any one with a cause — think celebrities, politicians, and even brands. As Forbes staff writer Jeff Bercovici pointed out, this makes Thunderclap a potential competitor to Twitter, and that could very well be the darker motivation behind Twitter’s decision to disable the service. Twitter offers a variety of Promoted Products that advertisers must purchase to achieve additional exposure for their tweets or accounts.

Thunderclap says its investigating the matter with Twitter, and a tweet from the service two hours ago suggests that Thunderclap will be up and running shortly. Still, the future of this new crowdspeaking platform seems to be jeopardy.