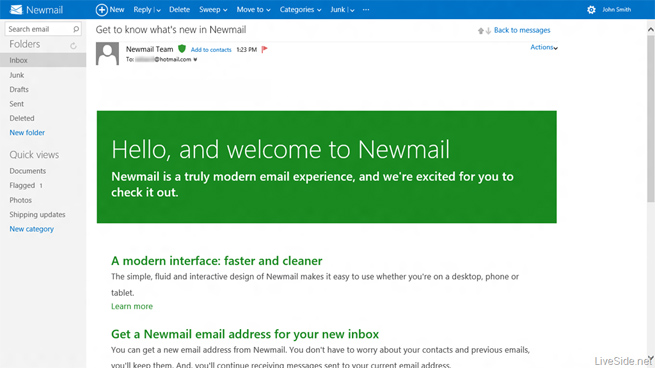 Microsoft’s popular Hotmail client appears to be getting a Windows 8-style Metro makeover, according to screenshots leaked to Microsoft-focused site Liveside.

Hotmail is the largest webmail client by users in the world with about 350 million accounts, far above Yahoo’s 300 million and Gmail’s 250 million. But Hotmail has not been radically redesigned in years, so it makes sense that a facelift is in the works, especially with Microsoft moving its products to the Metro-style interface. The Windows 8 and Windows Phone OSes, along with Microsoft’s Xbox 360 dashboard all have strong similarities, so now it looks like Hotmail will be joining them.

If the leaked screens are correct (ignore that it says Newmail), the design would likely be quite the wake-up call for the masses that use Hotmail. It has a much more refined and modern interface than old Hotmail. Long-time Hotmail users will likely dig the new interface (we’re sure they will make a smooth adjustment), but the real question is whether Hotmail could potentially attract users from Gmail or Yahoo with the better design.

It’s not clear when exactly Hotmail’s revamp will go live, but it would make sense for the update to happen in next several months, which is the same time frame as we expect to see Windows 8.

Let us know in the comments what you think of the new interface.