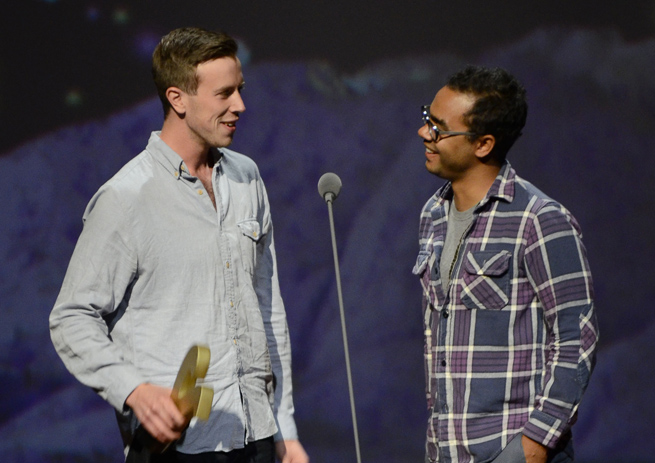 As I’ve written about previously, the Vimeo Festival + Awards is taking place alongside a rapidly changing company. Already this year, a new CEO has taken the reins, the company has drastically redesigned its main site, and it has launched a wide array of apps to bring more mobile users into the fold.

Embracing a real-life awards show in New York City is the latest way the company is setting itself apart from other video-focused sites. Last night’s awards show leads up to Friday and Saturday’s Vimeo Festival, which will showcase other talents that have blown up on Vimeo.

Performers Reggie Watts and Beardyman co-emceed the show, playing some of their groundbreaking digital music on top of telling jokes. Sitting in the third row, I had a blast watching Watts’ and Beardyman’s performances. And even though the show had a few technical glitches and not every joke worked, it was an important night for celebrating independent film-making.

I would recommend checking out all the winners (see list below), as each is bringing something unique to the filmmaking space. I particularly love “Rear Window Timelapse,” which remixes the narrative of Hitchcock’s classic “Rear Window.” And don’t miss the outrageous and daring “K-Swiss Kenny Powers – MFCEO.”

Notably, the directorial duo Daniels won two awards during the evening. The first award was for their music video of Manchester Orchestra’s “Simple Math,” which you can watch below. And the second celebrated the duo’s career of making fantastic videos for bands like Foster the People, The Shins, and Chromeo.

The Grand Prize winner was three-man team Everynone for its stunning and clever video “Symmetry.” Two of the three winners accepted the award (top photo). Watch the grand prize winner below:

Check out the full gallery below to get a better taste of what the event was like in person: