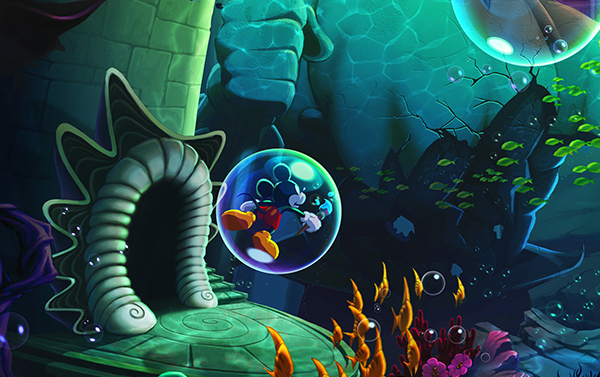 In 1990, Sega created Castle of Illusion, a platformer starring Mickey Mouse, for its Genesis system. Now, more than twenty years later, Disney Interactive Studios is using that title as the inspiration for a new 2D sidescroller for the Nintendo 3DS.

Epic Mickey: Power of Illusion sees the Castle of Illusion reappear in the Wasteland, a world where forgotten characters, rides, and now video games from Disney’s history go that was first shown in 2010’s Epic Mickey, an action-adventure playformer for the Wii. I had a chance to sit down with Peter Ong, the title’s director, to play through some of Mickey’s new adventure at the Electronic Entertainment Expo.

The castle is littered with a cast of characters from every era of Disney’s history, from Minnie Mouse (who debuted in the 1928 cartoon short Steamboat Willie alongside Mickey) to Rapunzel (the star of the 2010 computer animated film Tangled). Once the famous mascot rescues someone, they go to the Sanctuary, a safe part of the castle. Even villains, like Peter Pan’s Captain Hook and Aladdin’s Jafar, will take up shop at the Sanctuary after you defeat them and break the spell that the tittle’s main adversary, Mizrabel, cast on them. 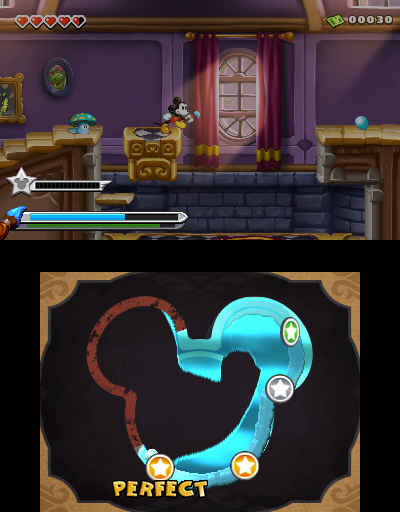 You can visit rescued characters at the Sanctuary in-between levels. They can send Mickey on quests that will reward him with useful items. For example, after rescuing Scrooge McDuck, most famously known as the star of the Duck Tales cartoon show, he sent me to find his lost lucky dime. After discovering it in the middle of a level and returning it to the richest duck in the world, he gave me the ability to summon a treasure chest that shoots out various goodies.

You can also upgrade the areas these characters reside in, which adds more detail and new opportunities for rewards. Sticking with the Scrooge example (I’m kind of a big fan of the bespectacled mallard, so I spent a lot of time in his area of the castle), his room goes from an empty area with a lone desk to a full, decked-out office, complete with the iconic door to his money bin.

The platformer borrows most of its mechanics from Castle of Illusion. Your main defense against the title’s many monsters is to jump on them. Unlike in Super Mario Bros., you need to be holding down a button before landing on your target, or else you’ll take damage. Timing the button press right before you hit an enemy will cause you to bounce much higher off of them, helping you reach out-of-the-way areas.

Power of Illusion also takes plenty of inspiration from Epic Mickey. Just like in that title, Mickey has access to paint and thinner, allowing him to create and destroy objects in the world. At certain points, a blank outline on the map on the bottom screen will indicate when you can draw an item into the castle. For instance, a canon that’ll shoot you to a high platform. The bottom screen will also show objects and characters that you can erase, like a spiky block that drops from the ceiling. 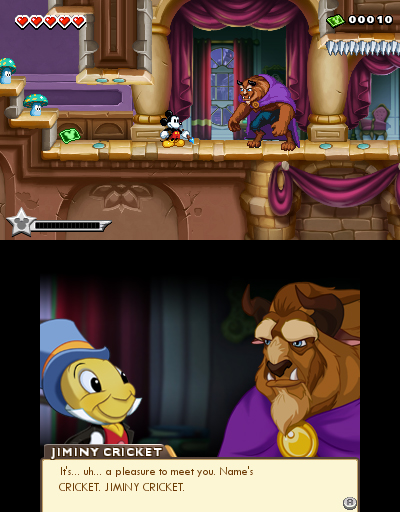 You also have stamp abilities, which you can draw into the world whenever you want (as long as you have them equipped), like Mickey’s sorcerer’s hat, which grants him momentary invisibility. Characters you rescue can also become stamps. Once he realized how much of a Scrooge fan I was, Ong told me he wants to add one for Donald’s rich uncle, who would bounce around on his cane like a pogo stick in a nod to the popular Duck Tales game for the Nintendo Entertainment System.

You can also shoot projectiles of paint and thinner, each with their own effects. Shooting a barrel that a monster threw at you with paint will send that barrel back the other way, while thinner would simply pass through the barrel and damage the enemy directly. Both of these abilities can run out, but are replenished by items that frequently drop from defeated foes.

Power of Illusion is looking to be a charming, fun title for Disney and platforming fans alike. While the game is a clear love letter to Castle of Illusion, it easily stands on its own as a clever 2D sidescroller thanks to the new and clever touchscreen mechanics that developer Dreamrift is adding to the mix.

Epic Mickey: Power of Illusion will launch on the Nintendo 3DS on November 18, 2012.