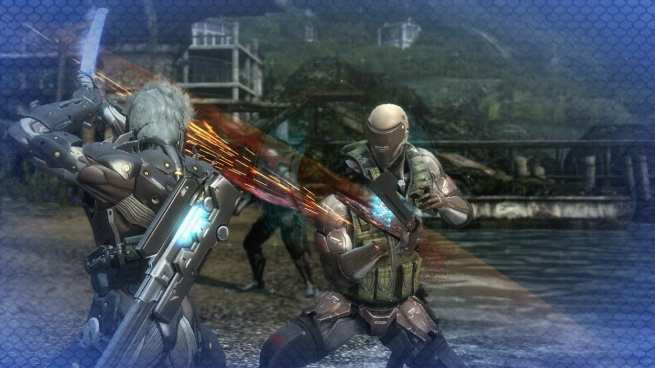 Metal Gear Rising: Revengeance is all about the blade. The game features the most comprehensive and precise sword control I’ve ever experienced. Using the title’s Blade mode, you can cut your enemies and environment into fine pieces. Want to turn an abandoned car into scrap metal? Go for it. How about giving that bad guy a new hairstyle? No problem. What if you want to chop up some conveniently placed watermelons into a delectable summer treat? You can do that too.

Revengeance isn’t a typical entry in the Metal Gear series. Don’t expect to do a lot of sneaking this time around. This is a pure, third-person, action-adventure effort. As the demigod-like Raiden, you have a series of devastating moves at your disposal. Your goal is to effortlessly glide through the battlefield, slashing and stabbing every enemy that stands in your path.

From what Konami has shown, Revengeance is a Raiden-only escapade. That means no Solid Snake or Big Boss. But to be honest, I didn’t miss the series’ trademark protagonists or stealthy gameplay as I hacked through a private demo of the title during the 2012 Electronic Entertainment Expo (E3).

The demo itself acted as a tutorial for Revengeance’s sword-centric control system. I started out in a training area littered with multiple targets ripe for mincing. Here, I learned about the intricacies of Blade mode. By holding the left trigger on the controller, Raiden would enter a focused state where I could accurately line up specific slashes. Entering the mode, however, took up energy, so Raiden needed to stay powered to stay effective. That’s where one of the game’s main attacks, the zan-datsu, came into play. Literally meaning “cut and take” in Japanese, zan-datsu assaults keep Raiden at full power, allowing his katana to eviscerate those who challenge him.

As I left the initial zone, I was able to execute zan-datsu attacks on some cyborg soldiers. Slashing a specified target on one of the hostiles triggered a seamless animation where Raiden chopped down the enemy and removed its battery pack, absorbing energy. 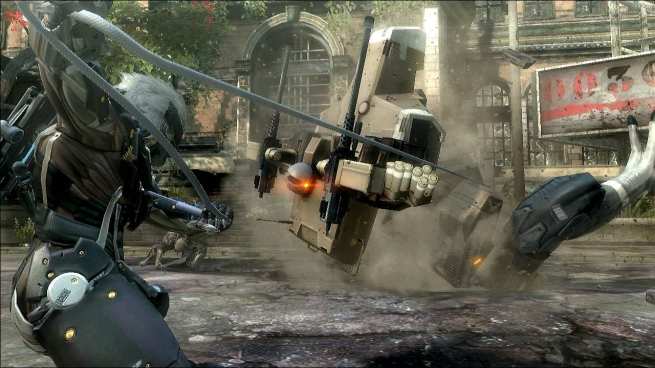 This sequence led to an encounter against one of the gekko walkers introduced in Metal Gear Solid 4: Guns of the Patriots. The gekko fight took place in a derelict park — complete with a rusted-out Ferris wheel. Instead of fighting the organic-and-synthetic monstrosity head on, I ran over to the wheel and cut down its metal support struts, causing it to collapse on top of the mech. Revengeance employs a sophisticated physics engine allowing for such possibilities. These touches, along with the cut-anything-and-everything sword dynamics, really open up the gameplay.

The demo ended with a multi-part battle against a hammerhead helicopter, which featured an extensive quick-time event where Raiden used the chopper’s fired missiles as platforms, jumping within striking distance of the machine. Of course, Raiden delivered the final blow, destroying the flying beast.

Metal Gear Rising: Revengeance made me feel unstoppable, and the fluid, katana-focused controls left me wanting to play more. Look for the title to hit store shelves in 2013.