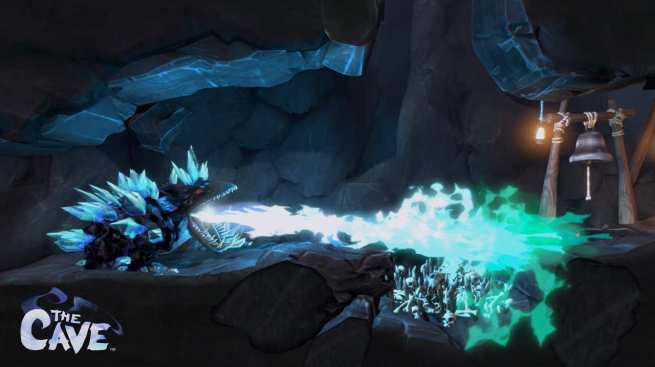 I had the chance to watch a private presentation of the game at Sega’s booth during the 2012 Electronic Entertainment Expo (E3), and I saw the makings of a potentially special experience. The Cave is the brainchild of Ron Gilbert, an icon of the adventure genre who’s worked on celebrated classics like Maniac Mansion, Day of the Tentacle, and the Monkey Island series. His latest project has you switching between seven personalities from completely different backgrounds, including a hillbilly, knight, scientist, monk, adventurer, time traveler, and even a pair of evil twins (who take up one character slot).

“The Cave is a place that people have been coming to for thousands and thousands of years to find something they’re searching for,” stated Matt Hansen, senior producer at Double Fine. Each character has a purpose for visiting the game’s titular location, and before you start, you’re asked to choose a team of three individuals to take with you on your journey.

Gameplay consists of typical adventure tropes like solving puzzles with a wacky combination of items, but the way you go about solving those challenges departs from the traditional point-and-click formula typically seen in these types of releases. Characters move on a side-scrolling 2D plane, which reminded me of another retro gem, The Lost Vikings. The different personalities will have to work together and use their unique abilities to succeed, and up to three players will be able to play together through local co-op.

Each spelunker will have his or her own specific section and storyline, and with the game’s three-character-team setup, the title will offer significant replay value. “By the end of (The Cave), you’ll see those three stories conclude, and then you’ll have an opportunity to play through again,” Hansen added.

One of the sequences I watched involved a ferocious cave beast, a hotdog, and some spikes — along with a little fan service in the form of a Monkey-Island-saluting New Grog vending machine. Gilbert’s signature sense of humor was evident throughout the demo, and my inner 10-year-old PC player couldn’t help but smile as I watched everything unfold.