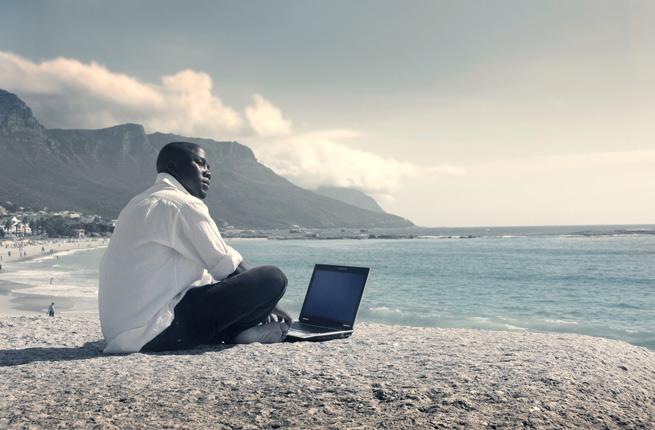 Just because you can Skype into a company meeting from a beach in Boracay, doesn’t mean you should.

Tourists are increasingly connecting to the Internet while on vacation, according to a recent study from Michigan State University. The walls between work, home, play, and now that last frontier of relaxation, vacations, have pretty much crumbled. Ubiquitous Wi-Fi, cell coverage, smartphones, tablets, and wee laptops are partially responsible, along with high-pressure jobs and workplaces that expect you to be reachable at all hours.

But you can’t blame technology and your boss for everything — your iPhone isn’t forcing you to check Twitter. While our use of smartphones on vacations has tripled in recent years, according to the study, it’s actually not all work and no play. Researchers found that 80 percent of people were using their devices to plan vacations and 70 percent were using them to do work (clearly there are a lot of multi-taskers). That means travelers are logging in to plan their activities while on vacation.

We use Google Maps to navigate, Yelp to find good restaurants, translation tools to look up phrases in the local language. For the truly last minute, there are apps like Hotel Tonight for making same-day bookings. Technology is also how we brag about our trips, replacing postcards and old-school photo albums. (If you go cliff diving in Acapulco but don’t Instagram it, did it really happen?)

Though easy access to this type of information is helpful, the benefits of unplugging completely may be worth packing a paper map. A Harvard Business School professor did an experiment with the Boston Consutling Group. Over the course of three years, 1400 employees were banned from checking in on work after 6PM just one day a week. Professor Leslie Perlow found that employees were happier with their jobs, and communication, productivity, and teamwork improved.

Personally, I think turning off your smartphone could increase the quality of a vacation. Sure, without GPS you could get lost in the back alleys of some strange city. But then you’ll actually have to talk to some locals, explore new locations, and potentially end up having a real adventure. I know, crazy talk.

The Michigan State University researchers tracked the computer and smartphone patterns of subjects for two years, during which time the use Internet on sabbatical increased. I guess things move slowly in academia, because while the results are just being released now, the data was actually collected between 2005 and 2007. (Tablets don’t appear on the list of devices participants brought on vacations, but there are a few pagers on there!) It’s a safe assumption that vacationers’ Internet usage has increased greatly since then with the proliferation of smartphones and vacation-friendly tablets.

The study will be released in one of my favorite publications, “Annals of Tourism Research.”

Man on beach image via Shutterstock