Ghost Recon: Future Soldier is really two games in one package. It would be nice if we could recognize that and give it two scores. With just one number down at the end, half the game winds up seeming better than it really is, and the other half of the game winds up sounding worse.

Sadly, in this unforgiving age of Metacritic and the rest of the score-aggregation mafia, one number it’s going to have to be. Just keep in mind, if all you’re about to do is read this introduction and then scroll all the way down to see the score, that the multiplayer game deserves a better grade and the single-player missions don’t.

Future Soldier’s solo campaign isn’t bad, but it needs some smoother scripting, a stronger plot, and a narrower focus on either action or stealth. You get the impression that it’s not quite sure how to find the right balance between the two. The multiplayer mode, on the other hand, gets that balance exactly right and a lot of other things besides. Part stealth, part gadgeteering, part pure gunfight, in a crowded field of military shooters, it still stands out.

Diving from cover to cover
The original Ghost Recon was a very slow, very deliberate first-person shooter. It wasn’t quite a strategy simulation, but it was close. Over the years, the series has gradually picked up the pace. Future Soldier isn’t quite a run-and-gun action game, but it’s getting there.

In some ways, evolution has taken the game in the right direction. Moving around the environment, for instance, uses a very cool context-sensitive system for picking new cover points. Shift the camera around and the character smoothly locks on to whatever bit of cover lands in the center of their view. Hold down the movement button, and he automatically hops over any obstacles and charges to that new spot. That one button is all you need.

None of this takes away from the challenge of surveying the environment, learning enemy patterns, and using camouflage to keep out of sight. It just means that none of the challenge comes from fighting with a complex control scheme. 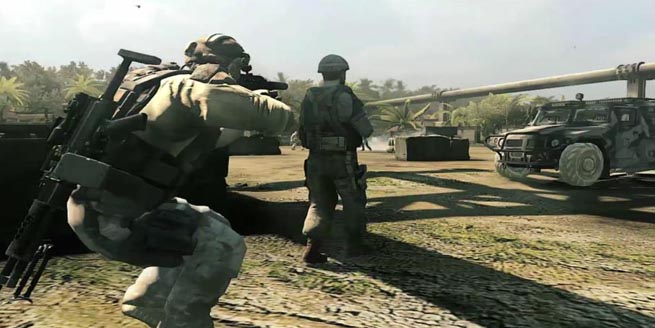 Watching a plan come together
In Future Soldier, the player directly controls only one member of the four-man Ghost squad. When they don’t have a specific target to focus on, the other three generally do their own thing as the artificial intelligence dictates. Guiding the entire team, then, is a matter of scouting the battlefield, picking out targets, and showing the A.I. where to work.

In an active gunfight, picking targets adds up to saying, “When you get a chance, shoot that guy.” During the sneaky parts of the game something more interesting happens — tagging a target assigns a Ghost to lock on him and wait. Once you tag as as many targets as you care to kill, hold down the fire button and the Ghosts all shoot at once.

Ubisoft calls this a “sync shot,” and aside from looking cool when four bad guys all fall at once, it’s a great way of incorporating teamwork into the stealthy side of the game. The player character still takes the lead in scouting out the battlefield, figuring out who to shoot and when to shoot them, but the team members still do enough heavy lifting to make them feel like more than just color commentary.

Miracles of modern technology
Like any good military shooter, Future Soldier has a giant selection of guns to choose from, and the Gunsmith customization mode offers umpteen million different potential combinations of barrels, suppressors, sensors, laser sights, and so on. The most interesting bits of equipment in the game, though, are not the ones that shoot people.

Instead, they’re the gadgets that hoover up intelligence and information about the battlefield. Enemies are often hard to see with the naked eye — camouflage actually works in Ghost Recon — and so there’s a whole separate aspect of gameplay that goes on before any shooting starts. Tossing out sensors, flying a little camera drone, and peering around with X-ray scopes to reveal where targets are hiding…all of this adds up to a neat kind of meta-shootout. Playing with what amounts to an R/C helicopter may not sound like as much fun as giant bloody shootouts, but you’d be surprised how effective it can be at building tension toward that moment of taking out your targets. 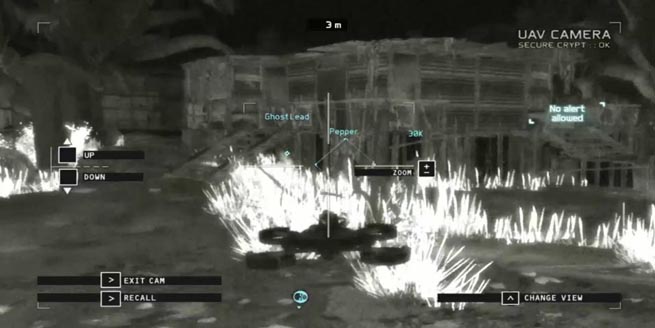 Using all those toys online
Class-based multiplayer does a lot for a shooter. Giving different styles of gameplay to different players encourages teamwork, it creates more replay value, and it adds more tactical depth. Another advantage, though, one that critics sometimes overlook, is that it opens up a game to more kinds of gamers.

Consider a game like Counter-Strike. Counter-Strike appeals largely to one kind of player. If you aren’t a shooter veteran with superhuman aim and footwork, well, enjoy getting shot in the head.

Future Soldier’s approach welcomes the Counter-Strike types. They can play the Scout class — the stealthy, sneaky, sniping commando class — and use their shooter skills to the fullest. Other classes cater to different strengths, though — especially the Engineer. Engineers carry intel-gathering equipment like sensors and drones for spotting targets and backing up other players’ attacks. They can make a huge difference doing something besides laying in those perfect headshots.

Watching players pick up on how the game works in the days since the beta has been interesting. Early on, almost everyone still tried to play it like a traditional shooter. Scouts were everywhere on most servers. Now, though, a couple of weeks after the retail version shipped, Engineers are representing in greater numbers. Folks have figured out how to use the gear like the drones to get the drop on the other team. (Unfortunately for everyone who got on the Engineer bandwagon early, players are also learning how to shoot down drones and backstab their unsuspecting pilots.)

Even though Future Soldier only has three official classes, gaining experience and unlocking new equipment reveal some loosely defined sub-classes within each one. For example, the Engineer can unlock a field computer that hacks objectives and enemy data feeds faster than normal. Some of those Counter-Strike experts are using that to play an in-your-face variation on the class, carrying stun weapons to take down enemies in close combat and hack them for intelligence. Finding those bits of depth in the game looks like it’s going to be a lot of fun over the coming weeks and months. 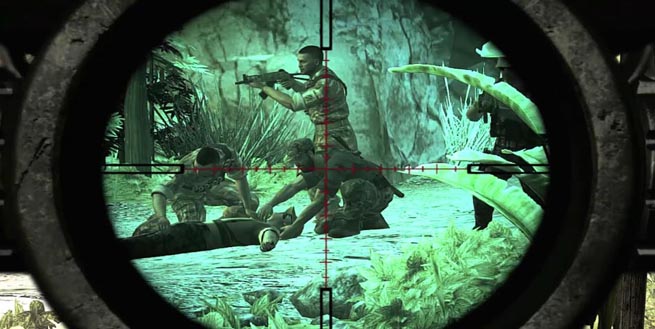 Trying to figure out the script
Generally, Future Soldier’s campaign works better when it’s trying to be a methodical Splinter Cell than when it’s trying to be an all-out-action Gears of War. The stretches of gameplay that emphasize stealth unfold with a consistent logic. Using cover and camouflage and gadgetry, scouting out enemy positions, taking targets down with the sync shot…all of that makes sense.

When a firefight kicks off, the game doesn’t quite descend into total chaos, but a lot of that logic disappears. Which is a completely realistic treatment of the subject — a battlefield isn’t a football field — but after you’ve died about half a dozen times at a stretch for no obvious reason, the fun starts to bleed right out of the game.

A lot of the more action-focused scenes in Future Soldier are scripted to funnel the player through certain areas and towards certain targets. That’s a tricky way to design a game like this. It’s no good when players can figure out that they’re riding on rails, and it’s just as problematic when they fall off those rails. Future Soldier hits both of those snags sometimes. It’s easy to get stuck and keep dying in a particular spot because you can’t tell where the script wants you to go — all that smoke and exploding stuff tends to obscure whatever might be pointing the way — and it’s frustrating when you finally do realize that your shooting or sneaking skill isn’t the problem; you’re just missing a scripting flag.

Another coup in Russia
When it comes to dialogue, Future Soldier is pretty well-written. The four Ghosts have a funny wisecracking camaraderie and enough distinct personality that we can tell them apart. Every so often an interesting character moment plays out in between missions — Ghost Lead has a simple but completely effective scene where he phones up his son on his way to another war. Some of the intermissions deliver a great action-movie impact, too. Watching a 9-11-style terrorist attack unfold in London is impressively terrifying, as tons of broken glass rain down from exploding skyscrapers.

As far as plotting is concerned, though, the campaign badly needs a creativity injection. Long-time fans of the series may recall that the original Ghost Recon was about a coup in Russia.  Future Soldier revolves around…yep, another coup in Russia. This isn’t just an overused cliche in gaming, it’s an overused cliche in movies, books, TV, everything. (It’s almost as overused as faceless terrorists with nuclear weapons, another cliche that Future Soldier briefly leans on.) Someone needs to declare a fiction-wide moratorium on coups in Russia as the centerpiece of technothriller yarns. The possibilities in the concept have been just about all squeezed out.

It’s unfortunate, then, that we can’t give the multiplayer mode its own score, because developer Red Storm did a bang-up job on that one. Future Soldier’s campaign is still a good time, and it hits a good window as far as length — 12 missions, each lasting an hour or so — but better scripting and storytelling would have carried it to much greater heights.

So if you’re planning to do most of your Ghost Recon online, do some mental math and adjust the number upwards. And don’t underestimate the R/C helicopter — no matter what kills you, you’re still just as dead.

Ghost Recon Future Soldier is available now for the Xbox 360, PlayStation 3, and PC. A PS3 copy of the game was provided by the publisher for the purpose of this review.