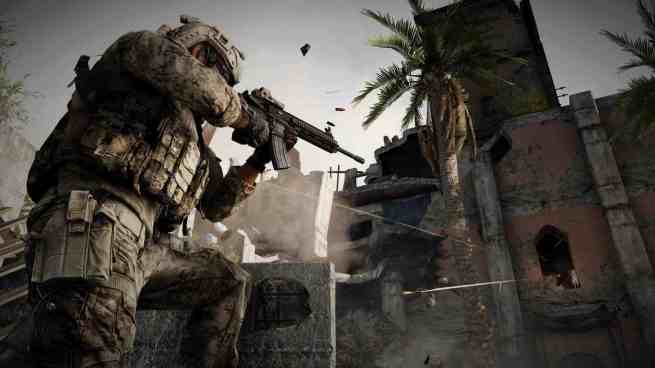 In war, fighting for the man to your left and right is everything. Electronic Arts wants to emphasize these battlefield bonds with its fire-team feature in Medal of Honor: Warfighter. I had a chance to experience the all-new mechanic at a behind-closed-doors multiplayer demo of the first-person shooter during the 2012 Electronic Entertainment Expo (E3).

Kristoffer Bergqvist, a creative director on the title, put the mode into simple terms, “It’s the feature where you get together with a friend, and you fight together as a fighting unit of two. This is a concept we got from the real special operatives … and we wanted to get that relationship into the game.”

As I hopped into a match, I was immediately paired up into a fire team with a fellow player. My new brother in arms received his own green highlight, making him easily distinguishable from the rest of my teammates and enemies. The mode encourages you to stick together with your battle buddy, and it even adds a new twist to spawn mechanics. You can now reenter the fight by spawning at your fire-team partner’s location, and if your colleague kills your killer, you will respawn immediately without a time penalty.

I found myself staying close to my brightly tinted teammate, exchanging ammo and pushing toward the objective. The fire-team feature added an extra layer of purpose to the multiplayer, giving me another reason to stay sharp.

Warfighter also features classes based on real-life special forces from around the world. “We have six different classes, and all these classes have their own special abilities,” Bergqvist added. “We’ve been adding a lot of depth … We want players to go in and experience (the game) for a long time and work out new strategies with the tools.”

I played as both a Polish GROM assaulter and American SFOD-D demolitions expert. The SFOD-D soldier was particularly devastating with his juggernaut-like special ability. With the press of a button, I became a human tank, able to sustain significant amounts of damage while dishing out plenty of pain myself.

The multiplayer demo allowed teams to mix and match different forces, creating NATO-like units on both sides. Bergqvist hinted that this will not always be the case, “The big new thing for the game is what we call ‘Blue on Blue.’ That is pitching, for instance, American special forces versus the Swedish (special forces) … We’re creating new game modes to support that.”

Overall, I enjoyed my time with Medal of Honor: Warfighter. While the game can be classified as just another modern-combat-style shooter, I feel the aforementioned new features help make it stand out from the pack. Get ready to form your own fire teams when the title hits Xbox 360, PlayStation 3, PC, and Wii U later this year.