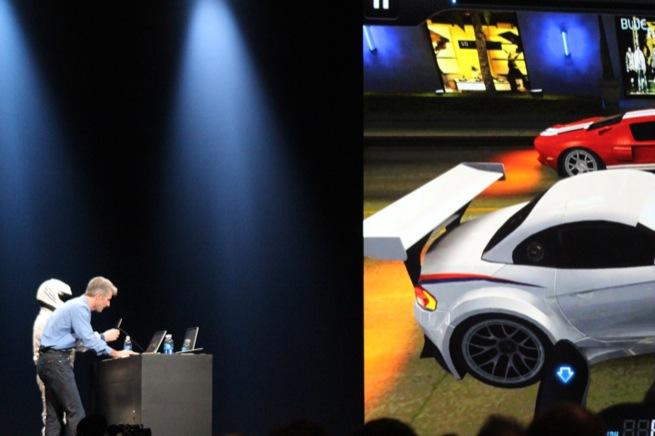 Apple is adding its iPhone social gaming service, Game Center, to the Mac for the first time, the company announced at WWDC Monday. This will enable more social gaming features that allow players to easily find their game-playing friends and play with them.

The new Game Center for the Mac will have access to a user’s iOS Game Center account, with all the same friends, achievements, and other data. And now you will be able to play across platforms, meaning a Mac Game Center user would be able to find and play against a player on iOS devices (iPod Touch, iPhone and iPad).

“We have seen a renaissance of gaming on the Mac,” said Craig Federighi, one of Apple’s operating system chiefs.

Apple showed a demo of CSR Racing, a new racing game being built by Natural Motion for a summer release. The game started out as iOS only, but the developer, Natural Motion, is now porting it to the Mac and integrating Game Center with it.

Nicole Lazarro, an iOS developer and creator of Tiltworld, said in an interview with GamesBeat that she was excited about the new features. She thought that one of the more important developments was the full integration of Facebook into the App Store. That means that users can “like” their favorite games and that will lead to more viral discovery of games.

“Discovery and re-engagement are two things we really need in games,” she said. “Being able to find a channel for getting noticed outside of the top ten lists is important for survival, given the number of games in the store.”

You will also be able to issue challenges to your friends via Game Center.

On the iPhone, 130 million players use Game Center. They are sending 5 billion updates a week. Apple’s Siri voice search feature can now find games and play them via voice commands. You can say to Siri, “Find Temple Run” and it will start up the game.

Games have become the juggernaut of the App Store. Nine of the top ten apps on the Apple iTunes App Store are games, according to AppAnnie.