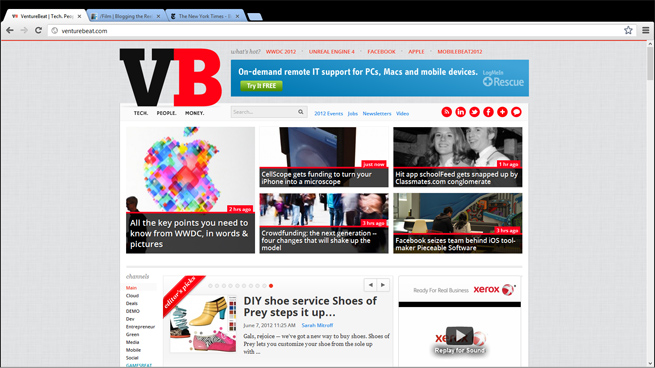 Google has released its first attempt at making its popular Chrome browser work with Windows 8’s Metro-style design aesthetic, and because the app ignores some of Microsoft’s Metro mandates, it’s actually quite good.

A few months back, we heard that both Google and Mozilla would release a version of their popular Chrome and Firefox browsers targeting Windows 8. Both companies rightly should, considering that if they don’t get on the ball, they could potentially not have their browser tested and ready to go on Windows 8’s release day (whenever that is).

To get access to Metro-style Chrome on Windows 8, you have to subscribe to the Chrome Dev channel for Windows and download the latest version (21.0.1171.0). Once you have Chrome as your default browser and pinned to the Win 8 Start screen, you’re good to go.

I downloaded Metro-style Chrome, and I love that it’s a far cry from Internet Explorer 10, the default browser in Windows 8. Whereas IE10 feels way different from IE9, this version of Chrome ignores some of the Metro design ideas that Microsoft has been pushing. When you right-click or press “Windows key + Z,” there should be an App bar that pops up at the bottom of the screen. Google, being Google, has instead opted to put a more traditional menu bar in the top right corner that you can click for settings and app changes. There’s also standard tabbed browsing that works smoothly.

However, like IE10, Chrome includes Flash Player built into the browser for viewing all kinds of Flash content. But here it differs slightly too, because IE10 uses an approved list of sites and Flash content, where Chrome displays everything.

One of my biggest problems with Windows 8 and Metro apps is how much it’s forcing me to change from my established habits for work and play. But Chrome works great here because it falls between old and new instead of just being NEW.

You can check out more screens of Metro-style Chrome in Windows 8 below: